In London, Kellogg's Swaps Snacks for Tweets to #tweetshop

Kellogg's is bridging the gap between social currency and real-life money by letting customers at a central London pop-up store pay for Special K Cracker Crisps with a tweet. 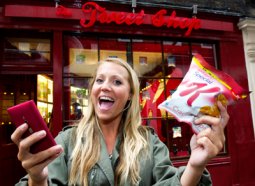 Allowing consumers to spend their social currency isn't just a good promotional gimmick. It is a concrete illustration of the value that Twitter holds in the real world, as well as a demonstration of how our online and offline lives are merging.

The twittersphere has been active, not only with tweets from customers claiming their free snacks in-store, but also with people spreading the word about the novel idea of products for tweets, which was thought up by Mischief PR with its experiential and events arm, Slice.

Tweets bearing the requisite #tweetshop hashtag so far include "Here's to healthier crisps and turning tweets into currency" and "my first tweet and it's from #tweetshop! Brilliant! And free crisps as well!" The initial response has been overwhelmingly positive, with only one tweeter joking, "Disappointed to find out it only deals in crisps. Where's the option to trade tweets for Mulberry handbags?"

Zoe Lazarus, a partner at Lowe Counsel, has identified the trend toward monetizing social currency in her report, "The New Value Shift." She said, "Consumers now recognize the value of the data they create on social networks and search engines -- the Facebook IPO has highlighted that -- and the power is shifting, as brands begin to acknowledge the real value of consumer networks."

In South Africa this summer, a Cape Town vending machine was set up to deliver free BOS iced tea when it received a tweet with the hashtag #tweet4t. Innocent drinks, the smoothie-maker that is majority-owned by Olympic sponsor Coca-Cola, set up a "tweet for a seat" scheme, inviting its followers to tweet who they would like to take to the Olympics and why, including the hashtag #tweetforaseat.

American Express has also jumped on the trend for monetizing social-media value, running a campaign in conjunction with Foursquare and upmarket department store Harvey Nichols during London Fashion Week. Cardholders were able to sync their Amex card with Foursquare, and if they checked in at the department store they were given a $40 credit if they spent $40 in-store.

Also, at the 2011 Cannes Lions International Festival of Creativity , two creative directors from R/GA won a Cyber Grand Prix for a campaign offering a free downloadable copy of their book to anyone who tweeted about it.

But the Special K campaign may be the first example of real-life human interaction using the pay-with-a-tweet concept. Dan Glover, creative director of Mischief PR, said, "We believe that physical and social are one and the same. When we had the idea it felt very simple, and we did a lot of checking to be sure it was a world first. We jumped on that and made it happen -- it was eight weeks from idea to execution."

Sarah Case, brand manager for Special K, said in a statement, "The value of positive endorsements on social-media sites is beyond compare, so we're excited to be the first company to literally use social currency instead of financial currency to launch this new product in our bespoke Special K shop."

The pop-up store, open for just four days until Sept. 28 in London's Soho, is selling only Special K Cracker Crisps, a new low-calorie potato-chip snack from the Kellogg's-owned brand. It is staffed by Special K girls, all wearing red dresses familiar from the TV advertising. Among the hundreds of packs is a live community notice board that displays #tweetshop tweets as they happen.

Special K Cracker Crisps usually cost $1 a packet and are available in three flavors -- sea salt and balsamic vinegar, sweet chilli, or sour cream and onion. They come in at under 100 calories a pack.