When marketing professionals in the West think about China, what cities come to mind? Chances are Beijing, Shanghai and possibly Guangzhou, the southern metropolis home to P&G's China headquarters.

Those are China's "tier-one" cities, but executives on the ground in China say the areas with the most potential are the lesser developed, booming lower-tier markets with burgeoning middle classes.

"The major trend is that all the international brands want to go into third and fourth-tier cities. And all the local brands want to enter first and second-tier cities. This is a period of growth that really highlights the importance of regional marketing," said T.B. Song, chairman of Ogilvy & Mather Greater China, the WPP Group agency network that 's been most aggressive about establishing operations in lower-tier cities in China.

Dividing China's cities into tiers is an inexact science at best, and there's no standardized classification system. Agencies and marketers generally go by average income and a city's development, though everything changes so quickly in China that a city can jump from one tier to another within a year. Classification can also widely vary—Coca-Cola divides Chinese cities into three categories, while local sportswear company Anta uses 10 tiers.

Generally speaking, tier-one consumers are savvy and use their average monthly household income of $1,100 to buy smartphones and products from international brands such as Nike and Volkswagen. Lower-tier consumers make less than half that income and prefer local, cheaper brands. When it comes to cars, the brand's not important—just having a car is a status symbol because it means one is able to pay for the gas.

Influential local marketers are the key force driving agency networks' expansion beyond tier one. Take, for example, Nanjing, a tier-two city on the banks of the Yangtze River 200 miles from Shanghai that boasts a booming high-tech industry. Nanjing's GDP grew 12% last year compared with 9.2% for China overall. 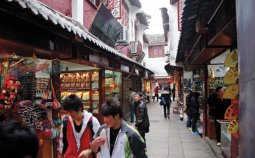 Ogilvy partnered with Nanjing Yindu Advertising Agency for six years before acquiring the shop last year to form Yindu Ogilvy. International agencies expand into lower-tier markets through acquisitions or opening their own satellite offices; the advantage of an acquisition is it comes with existing relationships with crucial local clients.

"Local clients really need local relationships. So if (the local agencies) have a stable relationship with the local clients, then we have a better chance of improving the services they can provide to them," Ogilvy's Mr. Song said.

Business in markets such as Nanjing is booming. One of Yindu Ogilvy's key clients is consumer-electronics retailer Suning, which reported profits up 20% in 2011 and plans to open 426 new stores this year, including two in Japan.

Yindu Ogilvy, with 250 staffers, is expected to grow by 20% each year.

Agencies in markets like Nanjing are frequently full-service, reflecting many local clients' preference for one agency to handle all aspects of marketing and communications. Still, Mr. Song notes, the work remains focused on basic brand-building.

Other ad groups may not have as big a footprint in China as WPP, but all point to the importance of cities such as Chengdu (population 14 million), Wuhan (10 million), Shenyang (8 million), Nanjing (8 million) and Xiamen (3.5 million).

Want to tap China's next wave of growth? Join Ad Age and Thoughtful Media for Market to Watch: Building Brands Beyond Tier One in China on Sept. 5 in Shanghai.

For tickets and information, visit events.adage.com/china.

"Many people outside of the region don't realize that even China's lesser- known cities are major population centers. Ten years ago, China already had over 170 cities with populations of  more than 1 million, and those numbers have grown during the last decade," said Serge Dumont, Omnicom Group vice chairman and head of Omnicom's Greater China business unit, in a statement to Ad Age . The holding company's 40-plus agencies in China operate in 30 cities.

Publicis Groupe has been particularly aggressive of late in China, making eight acquisitions since February 2011, including local agencies with expertise in areas such as e-commerce, digital and events and experiential marketing.

"The acquisitions we made so far over the last few months were made to fill in some gaps in capabilities, more than to organize a geographic expansion," said Chief Operating Officer Jean-Yves Naouri, who makes monthly trips to China.

Expansion in China can be difficult, particularly with the marketing culture in smaller cities still in the early stages of development, said Sabrina Lee, general manager of agency consulting at independent marketing consultancy R3, which has been working with various ad-holding companies on mergers and acquisitions in China.

"All the holding groups are very eager to enter these tier-two cities but they haven't achieved a lot of results yet. ...They really want to go over there but they will run into some problems," she said. "So they're waiting to see if those markets will mature a little more or they are making adjustments to their own operating models."

In the eastern coastal city of Qingdao, Publicis China Chair Sheena Jeng is racing to build a team of 50 to 60 to staff a new satellite office. Publicis won the creative and strategy accounts for home-appliance maker Haier's white-goods division in April. "It's really hard for us to find top-tier talent located in Qingdao," she said.

The team will work closely with the marketing team at Haier headquarters, a factory complex where many of its goods are manufactured. The agency's remit involves helping Haier build its brand in markets across China, from tier one to tier seven.

Ms. Jeng said it's Publicis' first time to set up a satellite office dedicated to one client, but the experience is valuable. "In the future, for a lot of Chinese big brands, we can use this model to tailor-make a team for them."

That may include agencies in both the top and lower-tier cities.

"The minute they decide they want to become more sophisticated, they say, "Why can't we use an agency in a tier-one city?'" Publicis' Mr. Naouri said. "So if you think that because you establish yourself in a tier-two city you will have access ... you may have some surprises."