As the world waits impatiently for news of the royal birth, media outlets are keeping excitement at fever pitch, finding ever more inventive ways to keep the story going until the prince or princess, daughter of Prince William and Kate Middleton, finally arrives.

The Daily Telegraph and The Sun, both right-wing royalist papers, have set up a real-life "Royal Baby Watch," by streaming a live feed from outside the Lindo wing of St Mary's Hospital in London, where Kate is expected to give birth. The public can see what it's like to be one of the hundreds of journalists and photographers from all around the world, camped out in the London summer, enduring an unusual heat wave of temperatures in the mid-80s as they watch a pair of closed doors.

Future Publishing and the Press Association have released a free mobile app to provide updates about the birth, the baby, the family and anything else they can think of. There are plenty of other apps on the same theme – including a game called Royal Baby Run, a Royal Baby Booth to give your commoner baby the regal touch, and another game called Name the Royal Baby. 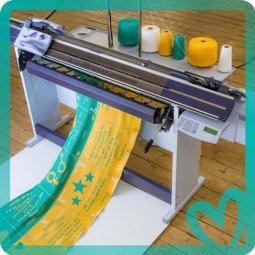 A knitting machine to crank out positive messages

Some brands are making a virtue out of patience. Procter & Gamble has created the "Royal Baby Blanket," inviting visitors to post wishes for the new baby, building a patchwork of positive messages using a knitting machine, and donating a diaper to a U.K. family-support charity for every wish shared.

Rival Unilever, meanwhile, has created commemorative baby packs of Persil detergent and Comfort fabric softener which are ready to go on sale the day after the birth of William and Kate's heir. The packs feature gold foil decoration and writing, as well as a gold effect cap on the Comfort bottle.

Bookmakers are also cashing in on baby fever as they encourage Brits to bet on the baby's name (the favorite is Alexandra) and birthday. Betfair's promoted tweets appear in response to twitter searches about the royal baby, and Coral sent a Queen lookalike to St Mary's Hospital, where she pretended to place a bet on the baby's name.

The new heir will eventually be king or queen of other commonwealth countries, including Canada, where Vancouver's CN tower will be lit up blue or pink when the baby arrives. In New Zealand, 20 landmarks, including Auckland's Sky Tower, are lined up to do the same. The U.K. will lead the celebrations, with the London Eye due to take on the red, white and blue of the Union Jack, and the Royal Mint releasing silver £5 coins engraved to commemorate the birth, given out free to babies born on the same day as the future king or queen.

It feels like life is almost on hold until the arrival -- there are stories of couples delaying naming their babies because they are waiting to find out what the prince or princess will be called.

JWT London has carried out a survey showing that more than half of Britons will feel prouder of their nation once the baby is born, 75% expect to see renewed interest in the monarchy, and 60% expect the birth to ignite a tourist boom.

The new baby will be the first royal heir born into the era of social media, making it the most "liked" and tweeted baby in history, while continuing the trend for the British monarchy to be more accessible to its subjects. Marie Stafford, planning foresight director at JWT London, said, "In the recent past we have seen signs that the Royal Family are becoming a little less remote; William marrying Kate, Prince Harry in Afghanistan and – at last year's Olympics opening ceremony – the Queen 'parachuting' into the Olympic stadium. It goes down really well and it seems there's an expectation, if not an appetite, for this to continue with the birth of the royal baby."