China's Not That Into the World Cup

Controversial Local Soccer Commentator Is Digitally Altered in Ad to Look African
READ THIS NEXT
Dispatches from the panicked GDPR frontline
As excitement builds around the FIFA World Cup, marketers globally want to leverage the event to build brands. But the job is especially difficult in China, where the World Cup, and soccer generally, are experienced and understood in a unique way.

Compared to previous World Cups, the usual hype and excitement here is relatively subdued. Local media content is dominated by coverage of 2010 World Expo in Shanghai.

As a result, the exotic excitement around the World Cup is largely drowned out. Even on the state-run China Central Television's sports channel and World Cup broadcaster CCTV 5, World Cup promotions are mainly programs about the host cities and local cultures in South Africa, a major Chinese trading partner. 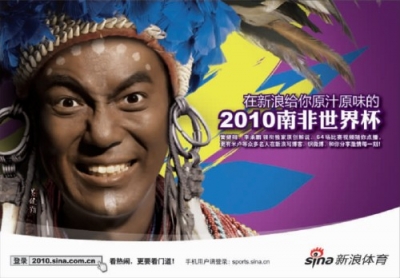 The absence of the Chinese national team in the World Cup -- not usually a concern -- seems more important this time around.

Huang Jianxiang is back for the 2010 World Cup
Even local media brands are looking for a new hook. The Chinese portal Sina.com has hired controversial pundit and former CCTV commentator Huang Jianxiang to lead its online coverage aimed at office workers and younger fans in internet cafes.

CCTV parted ways with Mr. Huang during the 2006 World Cup after an emotional on-air tirade celebrating Italy's elimination of tournament upstart Australia. Subsequently, Mr. Huang has made a healthy living from fighting the status quo.

Sina announced the collaboration with an ad featuring Mr. Huang digitally altered to look like an African man in traditional tribal clothing, playfully suggesting it will offer livelier broadcasts than the stuffy state-run broadcaster.

Asian Games give Chinese sports fans more to cheer about
Exacerbating low enthusiasm for the World Cup, local brands are producing highly emotional campaigns focused on the 2010 Asian Games that will be hosted in Guangzhou this November. Chinese athletes are expected to dominate the event, rekindling the glory of the Beijing Olympics.

Local sportswear brands like 361 Degrees and Anta Sports, for instance, have created emotional ads about the pre-game preparations of the national athletes. The Chinese beverage brand Wanglaoji reinforces the same message with ads showing ecstatic spectators cheering as local athletes power to victory.

So in an effort to drum up enthusiasm about the World Cup, some marketers have focused on the experience and celebration of the World Cup.

McDonald's Corp., an official global sponsor, offers customers the opportunity to "score" prizes and giveaways daily in stores, while a TV spot shows an exuberant prizewinner performing his own post-goal celebration with McDonald's delivery staff.

The campaign also highlights new behaviors the World Cup can create, such as late-evening viewing and impromptu gatherings of friends and colleagues. Supporting snack promotions, for instance, suggests to consumers the suitability of McDonald's outlets for enjoying mid- and late-evening games, with tray coasters providing details like the tournament broadcast schedule.

Sponsors focus on fun experiences, not soccer
Similarly, ads for Anheuser-Busch InBev's brand Harbin Ice acknowledges the soccer tournament's timing at the peak of summer, an ideal time for alfresco spectatorship at bars and restaurants. Ads show an icy bottle of Harbin Ice transformed into a World Cup trophy as a celebration of summer. The idea of icy refreshment is further supported by a series of online games and contests for soccer fans at harbin-beer.cn/worldcup, under the theme of "freezing over South Africa." The campaign started in April 2010, with a Harbin Beer Soccer Skill Challenge promotion.

Another sponsor, Castrol, activates local fans' passion for analysis and banter. Castrol's Chinese website (cn.castrolfootball.com) provides visitors with a comprehensive set of performance trackers alongside expert posts from past players and coaches. Themed around the idea of tracking performance, the site arms casual fans with the ammunition to come across as a seasoned expert, comfortable in even the most heated pre-game debate.

The messages around the World Cup with the most impact focus on individual players. Cristiano Ronaldo's image is ever-present in out-of-home ads for brands like Nike and Unilever's Clear anti-dandruff shampoo.

Soccer celebrities are a big draw
The impact of celebrity players is all the more powerful due to the inconsistent coverage of international soccer in China over recent years.

Coverage of the sport has become reliant on highlight reels, a format made popular with young Chinese by the NBA's presence in the market. Also, personalities provide a ready-made point of engagement and a way to passionately adopt another nation's team -- Ronaldo vs. Rooney, rather than Portugal vs. England.

In this context, an interesting part of Harbin Ice's interactive campaign is an online photo-sharing contest where visitors can post images of a body part they feel resembles that of their favorite soccer superstar. So far, fans have uploaded images to suggest their lips resemble those of Brazilian superstar Ronaldinho, their smile is similar to David Beckham's; or they have the nose of former Italian star Roberto Baggio.

In a year when the World Cup has to compete for attention, recognizable soccer celebrities provide an enviable way to personalize the event for fans in the absence of China' s participation. Campaigns that celebrate the actual enjoyment and passion of watching the tournament are most likely to resonate strongly with fans and newcomers.