Will Group Go After Kraft Next for Moving Cadbury's HQ to Switzerland?

LONDON (AdAge.com) ?- Marketers including Kraft, Tesco, Marks & Spencer, Vodafone and Topshop are living in fear of a group of activists called U.K. Uncut that are protesting against big corporations they say use tax loopholes to avoid paying their fair share of taxes and sharing the pain of the U.K.'s big budget deficit.

Street demonstrations have started in front of their retail outlets to disrupt business over the holiday period, damaging both reputations and sales as stores close down in response to the protests. 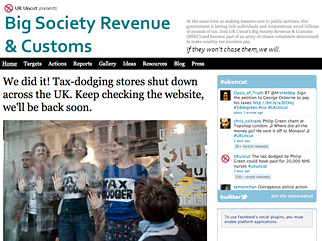 Uncut UK's website
"At the same time as making massive cuts to public services, this government is letting rich individuals and corporations avoid billions of pounds of tax," the U.K. Uncut website explains. Visitors are exhorted to "become part of an army of citizen volunteers determined to make wealthy tax avoiders pay." The group's motto is, "If they won't chase them, we will."

Vodafone, which recently settled a longstanding tax dispute with the U.K. government, was the first company to have its retail outlets shut down by protesters last month. Last weekend, 23 branches of Topshop were closed down on one of the busiest shopping days of the year, including the flagship store on London's Oxford Street.

U.K. Uncut's website identifies targets like Vodafone and Topshop owner Philip Green who avoid taxes through legal tax loopholes. The group claims that the government is tackling the country's massive budget deficit by cutting vital services and benefits, when they should be making these companies pay their dues instead.

Summoned by Twitter and Facebook, groups of mainly young people are staging national protests against the perfectly legal but, they claim, morally dubious, actions of big U.K. businesses. Philip Green, founder of Arcadia Group, which owns Topshop, put his retail empire into his wife's name, based it in Monaco, and paid her $1.9 billion, tax free. The site notes that the amount Mr. Green would have paid in taxes if he hadn't sent the money to a tax haven where his wife has legal residence could pay the salaries of 20,000 nurses in the U.K.'s National Health Service.

Kraft is expected to be U.K. Uncut's next target after the news broke that the company plans to move Cadbury's headquarters to Switzerland, reducing its U.K. tax liability by around $95 million a year. The patriotic British public was already upset that the brand had been sold to the Americans for $17 billion at the start of this year.

A U.K. Uncut spokeswoman, who introduced herself only as Becky, said, "We are not damaging reputations -- their own corporate behavior has damaged their reputations for themselves. People work on goodwill, but these companies don't. Their marketing teams are not shouting their tax schemes from the rooftops. We are pleased that people are talking about tax avoidance and starting to make the link to the cuts."

A Vodafone spokesman described the company's supposed unpaid tax bill of up to $9.5 billion as an "urban myth." He said, "Vodafone was targeted by U.K. Uncut based on assertions in [satirical magazine] Private Eye. The idea that we've been let off a $9.5 billion tax bill is preposterous."

He added that Vodafone is a U.K.-registered company, with head offices in the U.K., and has just paid $2 billion in taxes.

The U.K. Prime Minister David Cameron has already responded to the protests by announcing a "clampdown" on tax avoidance, claiming that the closure of some loopholes will raise an extra $3 billion over the next five years. U.K. Uncut's Becky called this a "feeble gesture" and added, "We are in this for the long haul. We have got our work cut out for us. No one is off the hook."

Meanwhile, U.K. Uncut's active Twitter feed keeps mobilizing the troops, urging people to write to their Members of Parliament, and posting tweets about actions like, "Hilarious and effective one-woman Topshop protest." Some tweeted efforts seem a little off target like, "Student in arrears with mobile phone bill superglues own iPhone to side of head."

Chris Arnold, founder of independent agency Creative Orchestra and an ethical marketing specialist, sees the U.K. Uncut protests as a big problem for the companies involved. "If I was one of the CEOs, I'd be losing sleep over this," he said. "Big corporations have an image problem, they are seen as greedy and untrustworthy. These problems are not going away -- they have tipped over into the mainstream to breed a softer, more middle-class version of anti-capitalism."