Also, a Massive Ad Campaign With a New Slogan
READ THIS NEXT
Dispatches from the panicked GDPR frontline 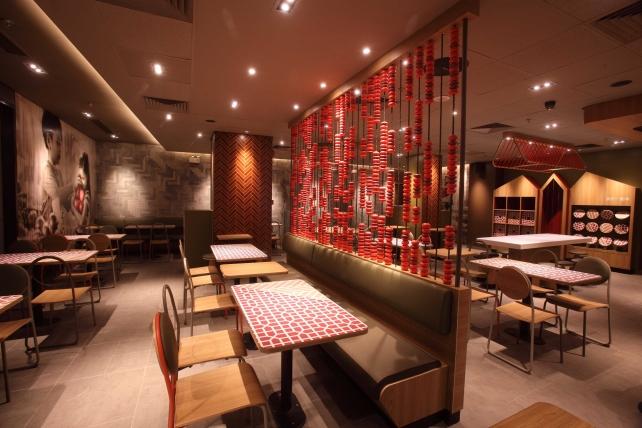 The décor in the new McDonald's restaurant in Guangzhou, China, plays with the country's traditions: Hanging lights are styled on the bamboo baskets used for steaming food, and a giant abacus serves as a room divider.

But the most meaningful Chinese symbol might be the round tables that can seat 10. In other markets, they'd be wasted space. But, in China, they're a staple of banquets and a symbol of togetherness. That's the heart of McDonald's new slogan in China: "It's good to get together."

The company is trying new tactics to appeal to Chinese consumers as it prepares to open its 2,000th restaurant in China, now its third biggest market after the U.S. and Japan. But as the country's economic growth has slowed and it struggles to adjust to consumer tastes and faces more competition, McDonald's has seen same-store sales fall.

McDonald's is rolling out the togetherness message in a massive way: It bought three consecutive minutes of airtime after state broadcaster CCTV-1's evening news Friday to debut commercials from TBWA Shanghai. (McDonald's didn't answer questions about how much the airtime cost.)

As China continues to urbanize, McDonald's wants to be a hub for socializing.

"Our research says that in China, consumers see McDonald's as a place for gathering and socialization – and that's very different from the U.S. consumer," Christine Xu, VP and chief marketing officer of McDonald's China, said in an interview. "In the U.S. a lot of consumption is made in the drive-thru lanes, so the way it's consumed is different. The way it fits into their lifestyle is different." (It's worth noting though, that amid China's car boom there are more drive-thrus here -- more than 240 today, 10 times as many as in 2008.)

The Chinese-themed concept restaurant in Guangzhou has a more upscale feel. The intent is that, as China gets more affluent, it feels like an aspirational destination. The design could eventually expand to hundreds of outlets in China, said Azmir Jaafar, VP and chief development officer of McDonald's China. And it has potential elsewhere, too.

"It could be rolled out in other markets, like India, but with Indian elements in the design," he said.

Localization is essential for any Western company to succeed in China. Foreign fast-food players haven't really localized store design in the past, though Starbucks -- growing swiftly in China -- has taken inspiration from local architecture. (A cafe in Fuzhou, for example, has the style of a local courtyard home.)

Others have tried to localize by catering to Chinese food tastes. KFC -- which has about 4,600 restaurants in China, more than double the number of McDonald's -- has done that aggressively with items like fish ball soup, spring rolls and rice porridge. 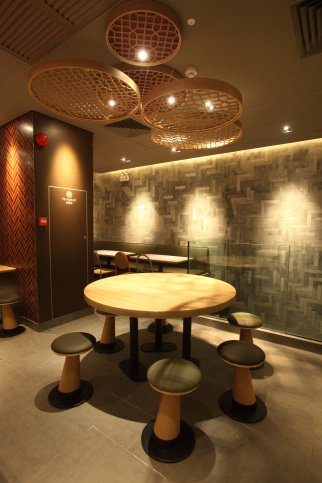 KFC and McDonald's are the No. 1 and 2 fast-food restaurants in China, respectively, but both have seen more competition from local chains such as Real Kung Fu, which sells steamed food, and Taiwanese fried-chicken chain Dicos.

The U.S. giants have also faced headwinds from questions over their chicken supply, avian flu fears and a slowdown in economic growth. McDonald's China comparable store sales were down 3.6 % in 2013 from 2012. KFC is also revamping its China offering, with an updated menu and much-needed store renovations.

"One of the problems KFC had is they've expanded so quickly they haven't done a good job of cleaning up and modernizing stores, whereas McDonald's has been very aggressive about doing that," said Ben Cavender, principal at China Market Research Group. "We're starting to see a shift where consumers are saying they actually like the McDonald's dining experience, more than at KFC."

McDonald's is also getting more aggressive about store openings: Last year it debuted 275 China locations and this year it plans 300.

Meanwhile, it's rolling out a new social media campaign, asking consumers to share favorite moments at the store, and it made a massive ad buy on Baidu, China's main search engine, this weekend.

"What we've done is give a layer of context to the 'it' -- why are you lovin' it?'" said Agatha Yap, senior marketing director for McDonald's China.

Later this year, McDonald's will debut an ad campaign featuring NBA star LeBron James. For now, TBWA's togetherness campaign focuses on contemporary Chinese archetypes: the young couple dreaming of buying an apartment and car; a family that just moved homes so their only child could go to a better school; and a young man who just relocated to a new city.

With so many Chinese moving outside their hometowns in search of a better lives, and with so many feeling jarred by the urban experience, McDonald's hopes to be a familiar haven.

"When you're chasing after affluence, when you're going through a cut-throat life, when you have a sit-down moment with your friend, with your child, with your husband, these are the moments that truly matter," Ms. Yap said.