The App, Line, Is Quickly Spreading Internationally, and More Than 10 Million People Already Use It In the U.S.
Japan's Line: Stickers aren't just for kids
Credit:

On Japan's popular mobile messaging app Line, cute stickers are a common way of communicating, and brands are having fun making them. So in Japan, a friend might invite you out by sending an icon of a teddy bear touting Pepsi and snacks. During the holidays, people shared KFC Christmas stickers featuring Colonel Sanders (he's not Santa obviously, but maybe it's a white beard thing.)

Outside Asia, some might snicker at stickers for grown-ups; meanwhile, Line is laughing its way to the bank. While bigger competitor WhatsApp isn't focusing on monetization, Line had more revenue last year than any other app worldwide on iOS and Google Play, according to App Annie.

Like Chinese rival WeChat, it's expanding beyond Asia, but WeChat hasn't released a breakdown of where users are based. Meanwhile, Line says 85% of its users are outside its home base of Japan. It's biggest in Asia, but it's also made strong pushes into Spain and Mexico.

Now, Line is using its base in Latin America as a gateway into the United States. In March, it ran commercials targeted at Hispanic viewers in both Spanish and English on networks including Telemundo and Univision. (See commercial below). Line – which offers free voice and video calls, as well as group or one-on-one sharing of text, photos and stickers – has extra money-saving appeal for people whose communications cross national borders.

"We think building a presence in Mexico or Latin America is a very good step in North America markets," said Shintaro Tabata, senior executive officer and head of corporate sales for Line Corp.

Line provides few details about its strategy in the U.S., though it has 10 million users there, out of its global base of 420 million. (It's hard to compare Line's popularity with other messaging services, since it doesn't break out the number of active users. But in the battle to control the world's smartphones, it's assumed Line comes in behind WhatsApp, with 500 million active users, and WeChat, which claims 396 million monthly active users.)

So: Could Line's signature feature -- its cute stickers, a form of elaborate emoticons for expressing feelings and opinions -- really take off in the United States? Mr. Tabata knows there are questions about that, "especially for mature adults, for mature males, because some people think using stickers could be regarded as a very childish behavior. But we don't think so," he said.

And though there may be "some cultural or psychological barriers, we think in the United States we also see a huge potential," he said.

"Line is WhatsApp on steroids," said Thomas Crampton, global managing director of [email protected]Ogilvy, which recently co-hosted Mr. Tabata at the Social Matters conference in Singapore. "It has more functionality, more engagement, more passionate usage and a faster speed of development of the platform than WhatsApp."

Line has gained users fast since it was launched in 2011 by a Japanese subsidiary of South Korea's Naver Corp. It prides itself on hitting the 100 million user mark in 19 months, compared to 54 for Facebook and 49 for Twitter. In Asia, its user base is young and skews female.

Free to download, Line has a three-pronged revenue model: It gets money from games, from sticker purchases and from official accounts, including branded stickers. (Mr. Crampton said he believes Line's games are more of a motivator for many users than stickers.)

In the first quarter of 2014, Line made $143 million, up 223% from the year-earlier quarter. Its monetization efforts are focused on Asia for now.

"Of course in the long run we think North America or Europe or Latin America or Africa could be main battlefields in terms of marketing," Mr. Tabata said.

How Brands Use It in Asia 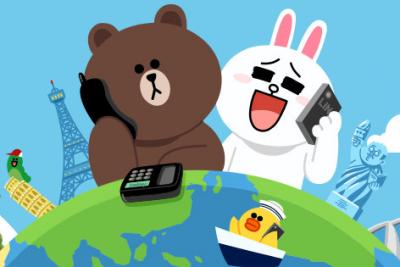 Companies that open official accounts on Line have to pay an up-front fee, unlike on Facebook, though the company argues the cost per fan is lower in the end.

For brands, coupons are big. Lawson, the convenience store chain, sent 10 million brand fans coupons in Japan, and 5% of recipients redeemed them.

Mr. Tabata says Line is much more effective than email marketing, which "is going to die," with its demise hastened by the Gmail feature that shunts promotional emails into a separate folder.

For brands, the company argues, a presence on Line is one way to fill the huge gap between consumers' time spent on mobile and the lagging ad spend there.

Branded stickers are another brand-building outlet. Some are free for downloading, while others -- like the Pepsi teddy bear sticker mentioned above -- are only available to people who purchase the product.

Line has been experimenting with e-commerce flash sales. In the near future, it will create new m-commerce possibilities by opening Line's official accounts API to corporate clients for customization.

So for example, people might be able to use their location to hail a cab. Or they might order takeout by sending a pizza sticker to a restaurant account.