Myanmar Is Ripe to Be Marketing's New Frontier

A dusty street vendor taps on the taxi window. He's not peddling flowers along the thoroughfare in Myanmar's business capital of Yangon. He's touting homemade copies of the country's foreign-investment law and import-export regulations. 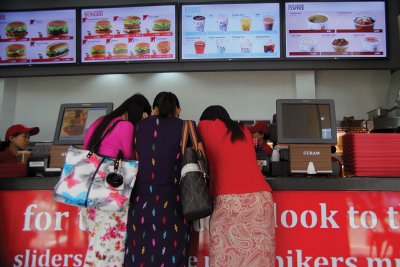 Myanmar is open for business. After two decades of isolating sanctions, this Southeast Asian country represents one of the few places largely untouched by Western brands. "The market is totally fresh. ... And the price of making a mistake is high," said Shakir Moin, marketing director for Coca-Cola in Myanmar and 10 other Southeast Asian markets.

There's heady optimism surrounding the Texas-size former British colony also known as Burma, though it presents acute challenges. The country is grindingly poor and rural, and distribution is a major hurdle. But the potential for change is dizzying. Myanmar is rich in natural resources, with a large working-age population and heavy foreign interest in infrastructure deals. In the digital age, farmers plowing paddies with water buffalo could be checking rice prices on smartphones in the not-too-distant future.

Muhtar Kent, CEO of Coca-Cola -- one of the first American businesses to re-enter Myanmar -- likened the feeling in the country to when the Berlin Wall came down in 1989, allowing the beverage giant to enter Eastern and Central Europe. There are "wonderful challenges and opportunities ahead," he told the BBC this month in Yangon as he announced a five-year, $200 million investment plan.

Coke will have to make the right first impression after 60 years away from the market. Solid figures don't exist on brand awareness in Myanmar, but "you can presume most people don't know [the brand]," said Mr. Moin. Reintroduction efforts include sampling at events such as pagoda festivals, supplying coolers to retailers that typically sell drinks at room temperature and distributing leaflets explaining the "correct" way to drink a Coke (answer: ice cold). 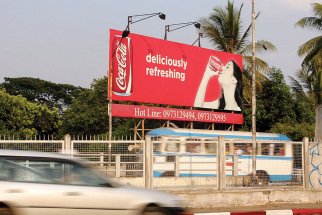 Coke is back in the country.

TV advertising is king, but there's no fancy analysis because data are lacking and only seven channels serve the 50% of families that own TVs. Outdoor is powerful, as are in-store and sampling. Remember Yellow Pages ads? They are alive and well in Myanmar.

MasterCard has sponsored a hotel and hospitality conference to build relationships with key partners. For now, it's targeting foreigners traveling to Myanmar. In the arrivals area at Yangon airport, signs declare: "MasterCard: The First Card Accepted in Myanmar."

MasterCard is accepted at 85 ATMs in Myanmar and 77 point-of-sale terminals, mainly at businesses like hotels and high-end restaurants, said Antonio Corro, MasterCard's country head for Thailand and Myanmar. Its agencies for the market include McCann, UM and River Orchid, an Indochina specialist agency.

"You cannot underestimate the potential of Myanmar. Forty years ago Myanmar was one of the richest countries in Southeast Asia," Mr. Corro said.

Myanmar could grow as much as 8% a year if it can diversify its economy beyond agriculture into areas like manufacturing, mining, tourism and telecom, according to a McKinsey & Co. report. Per-capita GDP could rise to $5,100 by 2030 from $1,300 in 2010, potentially creating a consumer class of 19 million.

Western brands aren't totally foreign to Myanmar consumers. The country was economically vibrant until a military regime seized control in 1962 and its economy fell behind those of neighboring India, China and Thailand. International sanctions applied since the 1990s for human-rights abuses cut off many global business ties. A new, nominally civilian government triggered a rollback on sanctions last year, transforming Myanmar into the next frontier for marketing.

Among Western brands, Unilever's Sunsilk shampoo is a hit. However, 80% of Sunsilk is sold in sachets, the sample-size packets that make it affordable for most consumers. At the market in the town of Kyauktan, a sachet costs 50 kyat, or 5¢.

"We cannot expect this country will overnight be the same as Thailand or Vietnam. That will take time. Like it or not, there will be a lot of things that will have to be developed from the ground up," said Bauke Rouwers, CEO of Unilever in Myanmar and several other Asian markets. "There's a big future ahead 10, 20 years from now. But we start from a very, very low base."

In a market like Myanmar, multinational clients need to quickly find a local partner or distributor and figure out who's important to know. Everyday problems include frequent blackouts and internet service so unreliable it can take an hour to send an email.

Still, telecommunications has the biggest potential among consumer categories. Mobile-phone SIM cards that used to cost $3,000 are now $2, and supply can't keep up with demand. Samsung shops seem to be on every other block in Yangon's downtown, amid hauntingly beautiful decaying colonial buildings. A $460 Galaxy S3 is out of reach for all but the wealthiest consumers. But phones from China's Huawei that cost as little as $80 are popular, a sign that some Asian marketers are beating Western rivals into Myanmar.

Zaw Min Oo wants to capture that upper crust of Myanmar consumers with the country's first international fast-food restaurant, part of a South Korean chain. "People are more and more busy, they can't cook at home, they need fast food like in Japan or Korea," he said over blaring pop music at his restaurant, Lotteria, which has attracted long lines since opening at the end of April. He plans to open 25 locations in the next five years.

College student Aye Chon Phyu and three girlfriends, sharing a $6 four-piece chicken basket, learned about Lotteria on Facebook, which they surf on their phones. Anecdotally, the social network has taken off in Yangon during the past few months with the rise of mobile internet service in the city. 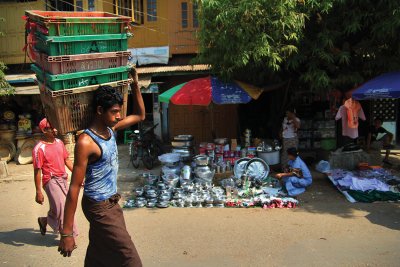 The country could grow as much as 8% a year if it can diversify its economy beyond agriculture into areas like manufacturing.

Western fast-food chains can't be far behind. Last month, KFC organized a tasting event in a Yangon hotel ballroom for Myanmar media and government officials. Its parent, Yum Brands, is exploring opening KFCs and Pizza Huts in the market, said a spokesman.

Agencies are following brands into Myanmar. WPP's Ogilvy was the first international agency in the country, in May 2012 acquiring a stake in local shop Today Advertising. Now called Today Ogilvy & Mather Myanmar, clients include Coca-Cola and Unilever's Ponds and Sunsilk. "Once things changed there politically and we were able to do business, we moved quickly," said Kent Wertime, Ogilvy's chief operating officer in Asia.

Dentsu is also open for business, and WPP's JWT has an affiliation with Mango Marketing Services, founded in 2004 by Aye Hnin Swe and Lynn Lynn Tin Htun after sanctions forced out international agencies. The local businesswomen have grown their shop to more than 50 people from seven and now find themselves overwhelmed with requests for help.

"Everybody comes in and asks for so many things," said Aye Hnin Swe, also known as Rose. She started her career with Bates in Myanmar and later established ZenithOptimedia's operations in the market. From being a sleepy place where the workday ended at 5:30, "what I see now are people are very willing to take on the challenges. ... You can really sense the spirit of enthusiasm."

Anxiously watching are local marketers like William Yang, whose company Shwe Tha Zin handled Unilever's distribution before the sanctions. When Unilever was forced to pull out, he filled the network with his own products. "Before it's like we [were] competing in the Myanmar league," he said, using a soccer analogy. "Now all of a sudden we are raised to the Olympics. Spain is coming, Italy is coming. There is a chance we might lose. That's a reality."