The idea for Bomoda originated, as ideas often do, at a dinner. Brian Buchwald's dining companion one night in fall 2011 was a Chinese woman from London, who said the city had become overrun by "a massive influx of Chinese tourists ... looking for places to go and things to buy but appearing totally clueless in the process," he recalled. "It was one of those moments when you say, 'Huh.'" 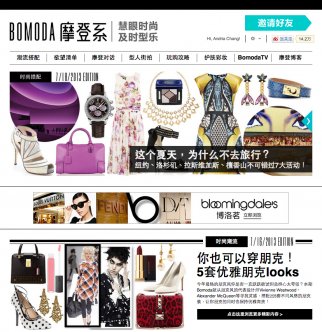 Mr. Buchwald, a former NBC exec who was the network's lead on Hulu during the platform's launch, probed deeper and discovered China, by some accounts, constitutes 30% of global market share in the luxury industry. Chinese luxury consumers are much younger than their Western counterparts and do a significant amount of online research about brands and products.

"If you create a relationship with them, that relationship can be very valuable for many years," said Mr. Buchwald, Bomoda's CEO. Co-founders are editor-in-chief Suki Sun and COO Alain Rothstein.

Bomoda is a newsletter designed to bridge the gap between international glossies that often use content translated from Western editions, and local publications that can be weak on global coverage. Bomoda's contributors are all Chinese, based in cities like New York, London, Paris and Milan. They present trends in a way geared toward educating the Chinese consumer, who often shops while traveling abroad. As Chinese travel more frequently and move away from overseas bus tours with designated stops at luxury stores in favor of more independent travel, their need for information grows.

There are four themed newsletters per week, including one centered on the U.S. A recent issue introduced popular punk looks in Europe, with details on putting together a similar outfit. An issue about hot restaurants in New York would also include suggestions on an appropriate look for each establishment.

"What we've found with Chinese consumers is their spending power probably outstrips their confidence. And what we want to do is help them become confident enough to start making their own decisions and not just rely upon the approbation of a friend or family member or something they see on a model in a magazine," Mr. Buchwald said.

Luxury sales in China have cooled due to economic factors coupled with a government clampdown on conspicuous consumption among officials. That's made it even more important for brands to communicate their stories to consumers. Bomoda features not only luxury heavyweights like Gucci and Chanel, but also lesser-known brands like Rag & Bone or Cushnie et Ochs.

Brands can sponsor editorial or even entire issues. For the U.S.-themed edition, Bomoda is working with Bloomingdale's, explaining the department store's heritage and introducing the brands and products available there.

In the coming months, Bomoda will launch a Pinterest-like site which Mr. Buchwald described as "the first real social luxury environment in China." To maintain an upscale digital experience, images that show up in search and browse will only come from Bomoda, brands, key opinion leaders and a few select others.

Items in photos can be tagged, and clicking on them will bring up product information and e-commerce links. In addition to advertising, Bomoda's monetization plan includes getting a cut of sales transactions from Bomoda subscribers.

Since launching in May 2012, Bomoda has signed up 160,000 newsletter subscribers. It plans to leverage the new social media network to boost that number, aiming to reach one million by the end of 2014.

"A key focus thus far has been the quality of our subscribers. Luxury brands need to reach the right consumers -- not just mass," Mr. Buchwald said.