Nike Challenges Ban on Its Promoted Tweets in U.K.

Nike is challenging the Advertising Standards Authority's ban on one of its U.K. Twitter campaigns, which the ad watchdog judged last month to be inadequately labelled as advertising. 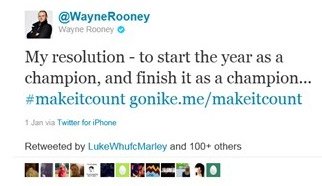 The promoted tweets, by England soccer stars Wayne Rooney and Jack Wilshere, were part of Nike 's "Make it count" campaign. Mr. Rooney, who has 4.5 million followers, tweeted, "My resolution -- to start the year as a champion, and finish it as a champion... #makeitcount gonike.me/makeitcount."

The advertising watchdog ruled that the Nike reference could have been missed, but the sports brand is seeking an independent review of the decision. It was a landmark ruling -- the first time that the ASA has upheld a complaint against a Twitter campaign since social networks came under its remit in March 2012.

A Nike spokesman said, "We do not believe that Twitter followers were misled because it was clear that the messages were connected to Nike 's 'Make it count' message. We, and many others, welcome the ASA's evolving guidance on the use of Twitter in marketing."

However, an ASA spokeswoman insisted that this case involved a standard application of the advertising codes. She said, "This is not a new, unchartered area. The tests were very much the same as the ones we use elsewhere on the internet."

At Nike 's request, the ASA has now referred the case to its independent reviewer, Hayden Phillips, who will decide whether or not to recommend that the ruling be overturned. The final decision still remains with the ASA council -- the same group that made the initial ruling.

The Nike spokesman said he believed that the ASA secretariat, which investigates complaints, had not judged the tweets to be misleading, but had been overruled by the council. An ASA spokeswoman refused to comment on how the decision had been reached.

This week, the ASA banned a second Twitter ad, when it upheld complaints against hairdressing chain Toni & Guy, which gave a celebrity a free haircut and then encouraged her to tweet about it, including the offer of a 10% discount to her followers.

Mars-owned Snickers, however, escaped the ASA's censorship in March despite complaints about tweets by another soccer star, Rio Ferdinand, and a glamour model, Katie Price. The campaign involved a series of five tweets, four of which were not labelled as ads. But the fifth came with the #spon hashtag, which the ASA deemed to be sufficient.