Young consumers are into technology -- but cars, not so much. So Nissan is reaching out to digital natives by bringing them into the car design process and giving them a hot new virtual reality technology to play with.

At the Tokyo Motor Show, the Japanese car company handed people virtual reality goggles designed by California startup Oculus VR. The company promises to bring the gaming world, among other things, to a whole new level by immersing audiences fully within a virtual environment via its Oculus Rift headset.

In the case of Nissan, the googles plunged participants into a virtual 3D world where they designed a concept car. Nissan is working on a theme it calls co-creation – including consumers in the car development process – and the VR game echoes that idea.

"We want to engage digital natives, people who would maybe not be interested in cars, or who expressed less passion for cars going forward, and co-creation allows us to engage them in a unique way, to bring them inside the process of vehicle development," said Nissan's global head of digital strategy, DeLu Jackson.

Young consumers aren't buying as many cars as older generations, though there's debate about whether it's because of economic pressures or because cars are losing some cache.

AKQA London worked with Nissan on the Oculus project, which Mr. Jackson described as "an interesting way to tell the story of what we do as a company, but also what the future looks like."

In the experience, participants start out with a chassis and build onto it by making choices about what to explore in the virtual world.

For example, in a scene featuring hot air balloons and kayaks in a river, people who gravitate toward the balloons signal a desire for comfort and elegance, while choosing kayaks signifies adventure.

The car design is adjusted based on each choice, and viewers come away with a virtual model car to explore inside and out. The game was part of Nissan's auto show kiosk showing off two concept coupes, the sporty IDx NISMO and the sleek IDx Freeflow. 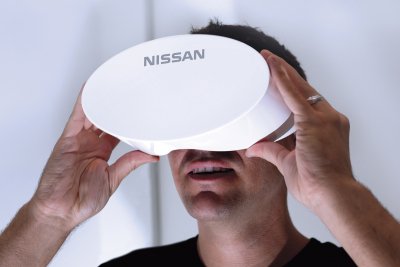 The Oculus Rift headset is still in development for the mass market, but since AKQA invested in the project through Kickstarter, it was given an early prototype to play with.

AKQA was experimenting with Oculus at the same it was exploring auto show concepts for Nissan, said Andy Hood, AKQA's executive creative development director. Combining the two was natural.

"One of Nissan's messages is 'innovation that excites,' … so the pairing of the two was particularly nice," Mr. Hood said.

The technology uses no handset, just goggles, and viewers navigate the game through eye movement alone.

The whole process takes five or six minutes. One challenge was having such a short time to explain to people accustomed to screens that the virtual world exists all around them, even behind them, Mr. Hood said. Designers introduced that concept by having a hummingbird fly right up to people's faces, forcing them to move around to dodge it.

Another challenge was "learning how far to push it before it starts to become too much roller coaster," he said.

More than 1,500 people tried the game at the Tokyo show that ended Dec. 1, some queuing for 70 minutes, AKQA said.

Mr. Hood imagines many applications for Oculus beyond gaming -- for example, schoolchildren learning about the Civil War "wouldn't have to sit and talk about what it's like to be at Gettysburg, (they) could actually be at Gettysburg."

He expects to see a lot of the technology in the next 18 months. "It's one of those things like iPhone apps," he said. "Once people start to see the possibilities, I can imagine the floodgates are about to open."