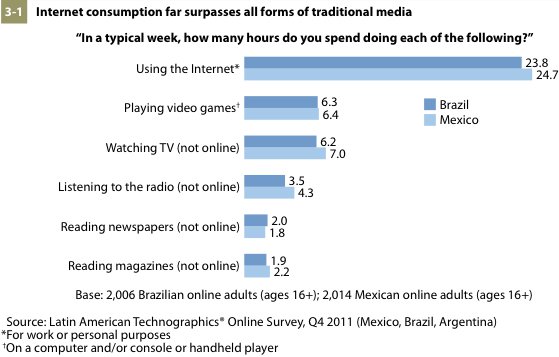 Brazilians and Mexicans surveyed share an appetite for social media, with 89% of the Brazilian group reporting regular visits to social-networking sites, compared with 88% of Mexicans. The key difference is in the dedication to a single channel: 86% of the Mexican group reported visiting Facebook at least monthly, while Brazilians' loyalties are more diffuse. Eighty-one percent reported visiting Facebook at least monthly, but 63% still reported going to Google-owned social network Orkut.

In terms of online video consumption, Brazilians and Mexicans were also remarkably similar, with a respective 86% and 83% reporting watching online video on sites such as YouTube. Both groups also showed an inclination toward being content creators, too, though there was some disparity: 28% of Mexicans surveyed reported regularly uploading video they create to a public site, compared with 16% of Brazilians.

The relative levels of internet and TV consumption reported by the Latin American respondents resemble what's been measured more scientifically in the U.S. and Asia Pacific region, according to Roxana Strohmenger, the Forrester analyst who authored the report. And the fact that a growing share of the Latin American population is poised to come online in the next few years, presumably consuming online content at similar rates, has serious implications for marketers, particularly those looking to be ahead of the curve in mobile.

Where Brazilian and Mexican digital consumption most markedly diverges is in mobile, since high import taxes on smartphones and expensive data plans have historically made them cost-prohibitive in Brazil. (A 2009 report by Nokia Siemens said that the monthly total cost of ownership of a data-enabled mobile phone in Brazil was the highest in the world at $225. However, the market does seem to be shifting, and a study released last August by Grupo.Mobi in partnership with digital agency W/McCann said there were 19 million smartphones activated the Brazilian market, and half of those had been purchased in the past six months.)

"You're starting to see cloned versions of smartphones from Asia coming into the market to compensate for the exorbitant cost of a BlackBerry or an iPhone," said Ms. Strohmenger of the Brazilian market.

But with mobile adoption in both countries poised to rise, especially in Brazil, the report points to social gaming as a potential beneficiary. (The Brazilian market for social games is projected to reach $238 million in 2014, up from an estimated $136 million last year.) More brands are taking notice of the potential there, and the report notes that Coca-Cola Brasil recently partnered with Quepasa Games to execute product placements inside its popular "Wonderful City-Rio" game.