Christina Hendricks' famous red hair – and its temporary transformation to blonde – has gotten Procter & Gamble into trouble with the Advertising Standards Authority in the U.K.

A commercial for Nice 'n Easy hair color, which is also running in the U.S., shows the Mad Men actor's transformation from redhead to blonde, with Ms. Hendricks declaring, "Goodbye red, hello golden blonde… I don't know if blondes have more fun, but I plan to find out."

After complaints that the dramatic change could not have been achieved using Nice 'n Easy alone, the ASA quizzed Procter & Gamble about the making of the spot, which was created by Grey Advertising.

P&G defended the product's performance, but admitted that they had shot the "blonde" part of the ad first, for practical reasons around Ms. Hendricks' availability.

The ASA concluded that, because the sequence in which Ms. Hendricks' hair was colored did not match the ad, it over-claimed on the capability of the product. The spot was banned for being misleading, exaggerated and unsubstantiated. (Unlike in the U.K., there haven't been any problems with the spot in the U.S.).

P&G said in a statement, "We are disappointed in the outcome as we are confident that the color change we depicted in the TV copy is possible and achievable using our products. However, we respect the final decision of the ASA and will be removing the TV copy from air effective immediately." 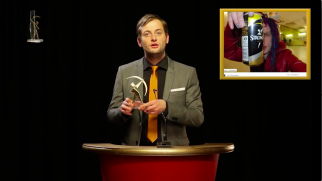 An online spot for Heineken's Strongbow cider has also fallen foul of the U.K. watchdog. It portrayed a spoof awards ceremony with a winning category called "Best Strongbow-as-my-other-half." The fictional recipient was unable to be there because he was on a date with Strongbow, but sent a note saying, "I dedicate this award to my family, to all the lovely creatures out there, and to my other half… I've loved you since the first day I met you. And I always will do."

Complaints focused on two sections of the ASA's codes that ban the portrayal of alcohol as indispensable or taking priority in life. The ASA noted the humor in the ad, but ruled that both codes had been breached, particularly by referring to Strongbow as the winner's "other half," and the fact that he missed the awards ceremony because he was on a date with Strongbow.

Heineken said in a statement, "This short film, made in 2011, was a clear parody of glossy awards acceptance speeches and the often perceived fake sincerity that they exhibit. We still believe it highly unlikely that viewers would seriously think that it portrayed Strongbow as an essential to life."