In France, Bollore-Backed Agency Is Known for Provocative Work for Weight Watchers, Orangina, Wrangler And More
READ THIS NEXT
Dispatches from the panicked GDPR frontline

Paris-based Fred & Farid Group will open its first overseas office in Shanghai in September, and says it will operate the locations as a single entity that bridges the French and Chinese cultures. 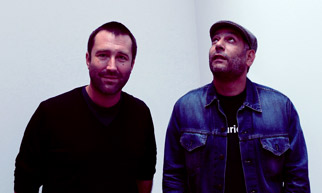 The plan is to connect the offices with 24 screens that will be linked up 24/7 so that colleagues can communicate via screen. All projects will be open to every staffer, and employees' working days will overlap for several hours across a six-hour time difference.

Fred & Farid Group was founded in 2007 by high-profile French creatives Fred Raillard and Farid Mokart, who have been work partners for so long that they share a single email address. They have 200 employees at five agencies in France -- Fred & Farid Paris, social media shop Kids Love Jetlag, digital agency Furious Monkeys, Eddi&Son for mobile and Hello Sunshine, whose guiding principle is simply "optimism." Mr. Raillard explained the oddly named agencies with a joke: "People talk too much about us in Paris, and we annoy people so we have to hide behind avatars."

Havas chairman Vincent Bollore helped fund Fred & Farid's startup and personally owns 30% of the agency, which is not connected with Havas. Fred & Farid operates as an independent and is funding the expansion itself. Mr. Raillard said, "We didn't ask [Mr. Bollore] for money for China because asking for money is losing power. We want to keep our independence."

The agency got off to a dramatic start. Messrs. Raillard and Mokart had returned from a stint at Goodby Silverstein & Partners in San Francisco and opened a Paris shop for Publicis Groupe , Marcel, named after Publicis founder Marcel Bleustein-Blanchet. Marcel reported directly to Publicis Chairman-CEO Maurice Levy, so it was a cause celebre when the duo defected a year later to do a startup backed by Havas, a Publicis rival.

"We have no intention to be everywhere," Mr. Raillard said. "We've been interested in China for a long time because the culture is so different -- the whole mindset, the approach, the spirit, the hard work, the positive energy. I hate companies who go into China just because there are a billion people there. This is about creativity and talent. We are coming in a humble spirit."

Fred & Farid Shanghai will open with about 20 people in a former opium warehouse that has space for 200 staffers. Messrs. Raillard and Mokart intend to spend a lot of time in China, with at least one of them always in the Shanghai office during the first three years. A new Fred & Farid logo will incorporate Chinese lettering in its design.

The agency is known for quirky, risque and sometimes unsettling work, including a spot this year for Weight Watchers that captures the frustrations of dieting, Wrangler print ads featuring fires and explosions, and the "Orangina, Naturally" campaign with 10-second spots where anthromorphized beasts use the drink in unusual ways. A panda uses Orangina as a deodorant, a dog as shampoo , a horse as mouthwash, and a cheetah as a car cleaner, often striking provocative poses as they demonstrate the soft drink's many uses.

France's depressed economy is one motive for the China expansion. "There's stress and tension in the marketplace, and it seems even harder than in 2008," Mr. Raillard said. "We don't want this atmosphere to damage the spirit of our company, so it is crucial to develop and grow. Everything is so different [in China] it feels like it is a whole world, and the rest of the world is a second world, like two big civilizations on one planet."