Pepsi Apologized to Me for Its Suicide Ads

This week, PepsiCo got into hot water with more than a few folks after some suicide-themed ads many found offensive were brought to light. Here's how they're using social media to apologize to consumers -- including me.

I received an e-mail from B. Bonin Bough of PepsiCo, @boughb on Twitter, responding to my tweet about the post that Matt Creamer wrote a couple days ago, "Pepsi Opens a Vein of Controversy With New Suicide-Themed Ads", regarding some ads that were run here in Germany in a lifestyle magazine. Pepsi says the ads won't run again after it received heavy criticism all over the web.

I'll excerpt the first part of the e-mail from Mr. Bough, who holds the title of director-social and emerging media and is based at Pepsi's Purchase, N.Y., campus:

I saw your tweet and I just wanted to make sure I responded personally. We agree this creative is totally inappropriate; we apologize and please know it won't run again. Also, thanks for the feedback and the Digg, it is important to discuss these types of issues.

My best friend committed suicide and this is a topic very close to my heart. So again I offer my deepest apologies.

Feel free to follow-up via twitter to me - @boughb or Huw - @huwgilbert or respond to this email.

I know you all think I am going to mock Bonin, but I won't. I think this was a very bold and risky maneuver and worthy of praise rather than a tarring and feathering. And his outreach to me, a nobody, was accomplished within two days. When I replied to Bonin, asking if I might be allowed to post his e-mail, he replied back that I could post his e-mail but to try to "treat it kindly." I hope I am. 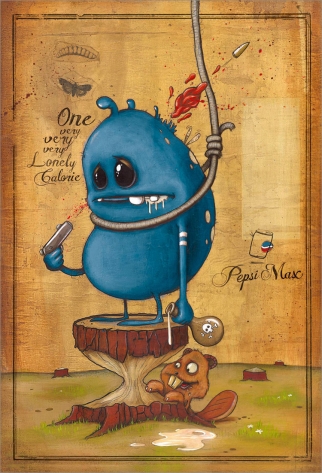 I don't think that Bonin knew that I blog for Ad Age or that I know a bit about how the marketer is surprised about how well-traveled the ads have been -- the old we-didn't-think-anyone-here-would-see-it approach. Well, that's the internet for you. Someone passed along the scans of the PepsiMax ad, "One Is a Very Very Lonely Calorie," to the alert gang here at Ad Age.

Within two days of tweeting, I received a note from @tweetmeme, a sure sign that my tweet had gone memetic (and that I had played at least a bit part in the mad traffic to the Ad Age post as well as the resulting 40 comments).

Here's how fast and furious social media works. The article was posted on Ad Age at 4:36 p.m. EST on Dec. 2. I read it and Tweeted at 6:16 p.m. EST the same day. And then I received said e-mail from Mr. Bough at 5:21 p.m. on Dec. 4. The lesson here is that social media has eyes everywhere and the network to make sure that advertisers can no longer hide stuff in niche markets. There is a word in intelligence about just this thing, and it relates to messaging and propaganda: "backwash." Social media makes backwash inevitable. Here's another one from intelligence: "blowback." Backwash leads to blowback.

There's no way to isolate this kind of advertisement. And there is an inverse proportion between how badly you want your ad to remain niche and the sensationalism surrounding its discovery. It's a really obvious point, but one still clearly worth stating: The internet makes it impossible for any marketer to control which geographies and demographics see any particular communication. You can't even really control what media it appears in. Think you're creating an edgy print ad that will only be seen in a German magazine? Think again. In the blink of an eye, your ad is on the web. You know, the world wide one. And all kinds of people are pissed off.

What I like about what "Bough, Bonin {PEP}" did here is that he responded almost immediately, rather personally, and opened himself up to us social-media mavens. Bravo! Full marks. Another thing I like about his apology is that there is a very good chance that I am being played, that Mr. Bough is playing reverse psychology on me. Yes, he readily approved my posting of this message when I asked, which leads me to believe that the very act of clicking on the post right now is just going to help PepsiCo with an amazingly savvy viral marketing campaign for PepsiMax.