Pepsi Max is closing the gap between social media and outdoor advertising by putting Vine videos on billboards across the U.K. as part of the brand's "Live For Now" campaign. 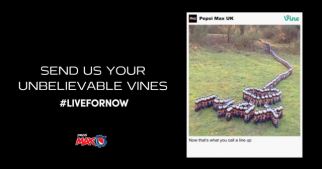 Members of the public are invited to create their own six-second "unbelievable" Vines, labeled with the hashtag #LiveForNow. The best submissions will be broadcast on Talon Outdoor's network of large-format, full-motion screens in seven of Britain's largest cities.

The billboards have already been take over by Pepsi Max in preparation for the Vine broadcasts, and are asking people to, "Send us your unbelievable Vines." A call for entries has also gone out on Twitter.

Paolo Nieddu, managing partner at Leo Burnett's Holler in the U.K., worked with a lot of user generated content for McDonald's 2012 London Olympics campaign. He said, "The key is to make sure that the content plays into the concept of the campaign. If the content is reflective of the brand, it will add value, but the brand needs to maintain quality control."

A YouTube channel will also be set up to showcase some of the best Vines, as well as branded content from Pepsi Max. The brand has a history of engaging social media in the U.K., regularly posting off-the-wall pictures on Facebook, provided by some of its 1.1 million fans.