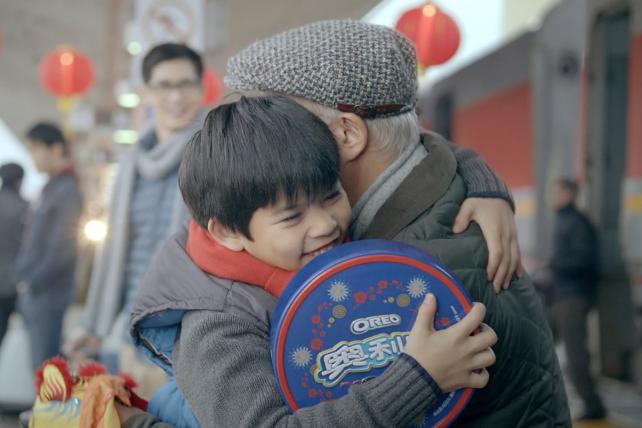 It's been a busy time for brands in China. During the Lunar New Year period, marketers tap into the festive spirit with messages about family, getting together -- and surviving the insanity of holiday travel in China.

Travel, especially trains, is a constant theme in commercials. Just about everybody travels back to their hometown, crowding trains and leaving road traffic at a standstill (and just imagine the lines at highway rest stop bathrooms). The official Xinhua news agency reported that people made 1.15 billion trips during the travel season. And despite the stress of getting home for the holidays, ads usually end on the same note: family's worth it.

The weeks-long Lunar New Year period doesn't officially end until March 5, though most people are already back at work now, having survived the trip. Here's a look at how a few big foreign brands have marked the holiday.

Every year in China, PepsiCo launches a massive holiday campaign called "Bring Happiness Home," involving celebrities, song and a charity aspect. This year it got involved with a popular smartphone app, Meipai, that turns people's smartphone movies into short music videos. Celeb-filled trailers invited people to submit their own clips about what the holiday means to them, and PepsiCo wrapped them into a video. (One funny moment captures people sleeping in awkward positions on trains.)

Interestingly, PepsiCo's holiday message was also broadcast outside China for the first time this year, in Times Square in New York – a place where ads are increasingly targeting masses of Chinese travelers.

PepsiCo was asked to broadcast its spot there as part of festivities organized overseas by the Chinese Ministry of Culture. The company said it was the first time a commercial campaign had been involved.

Train travel isn't arduous in Oreo and FCB Shanghai's spot, it's transformed into a child's cute fantasy. Andy Chan, executive creative director of FCB Shanghai, said in a statement that by "combining live action with 2D animation, we created a distinctive-looking piece of film that we hope will stand out in the crowded media space during this time of the year."

TBWA Shanghai's ad for McDonald's captures the warm family feelings of the holiday – something people sometimes need reminding about.

"Chinese New Year can be difficult for many young Chinese, especially those who work outside their hometown - trouble to get a train ticket, long hours sitting in traffic on long stretches of highway, and the unceasing interrogations from relatives about job, marriage and status," TBWA said in a release about the ad. "However they still want to go home during this special time of year because there are people they care about and who care about them at home."

This campaign from McDonald's Hong Kong and DDB Group Hong Kong started out with short unbranded teasers leading up this 45-second TVC.

It offers an interesting contrast to the ads crafted for the mainland. It's still about family, but there's no emphasis on travel, since people don't usually have so far to go home in Hong Kong (the bus in the ad is just a school bus). The spot also features a little girl and her pregnant mother, while you don't usually see multi-child families depicted in ads on the mainland, because of the One Child Policy. The law is loosening, but most urban families still only have one child.