Social Media Conversations Favor Independence, But Polls Say It's Too Close to Call
READ THIS NEXT
Dispatches from the panicked GDPR frontline

In Scotland's ad debate over independence, the ayes have it when it comes to momentum. "Yes" campaigners -- voting yes to an independent Scotland after 300 years together -- are gaining ground as their more positive message captures the imagination of patriotic Scots, encouraging them to believe that they have the resources to create a better future if they go it alone.

Scotland will vote Sept. 18 on whether to remain part of the United Kingdom, or become an independent nation. Opinion polls indicate that, whichever way it goes, the result will be incredibly close, so campaigning from both sides is growing ever more energetic as polling day looms.

The "No" campaign -- voting no to splitting from the U.K. -- once had a huge lead in the polls but now is running neck-and-neck with its opponent and losing momentum. The "Better Together" campaign message has slipped into a more negative tone, warning of impending doom for Scots who reject the support of the U.K.

Simon Labbett, founder and creative director of agency Hometown London, is an impartial observer. He said, "Obama proved that the word 'Yes' works wonders, conjures up all the right emotions and feels prosperous. I struggle with the 'No Thanks' slogan. Instinctively its sentiment feels negative, obstructive and backward facing, especially when emblazoned across our news screens in a sea of red with giant crosses."

It's been left to independent supporters to create more upbeat messages for the "No" camp. Two Scots in the ad business, M.T. Rainey, a founder and the 'R' in London agency RKCR/Y&R, teamed up with Andrew McGuinness, founder of Beattie McGuinness Bungay, to make the "Best Friend" film, emphasizing the bond between Scotland and the rest of the U.K.

The official "No" team came up with one of the year's most reviled ads, in which a woman sits drinking coffee while thinking aloud about how she will vote, and why. The film instantly spawned a hashtag, #PatronizingBTLady (BT as in "Better Together"), and a flood of derogatory memes. 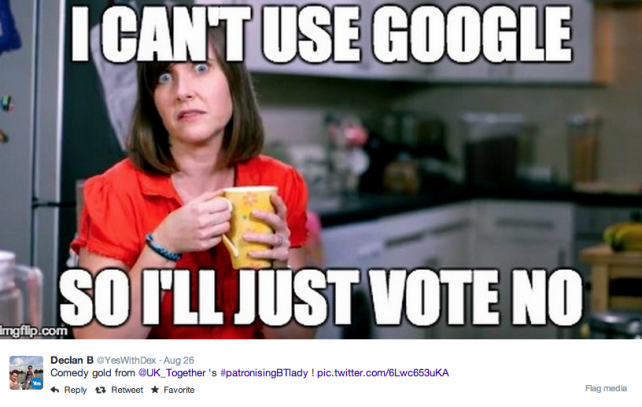 Neil Christie, managing director of Wieden & Kennedy London, grew up in Aberdeen and lived in Scotland until he was 21. Calling from Edinburgh, where he was on a business trip, he said, "'The Woman Who Made Up Her Mind' is implausible -- the strategy is showing all too obviously and she's transparently manipulative. The 'Yes' campaign is better managed."

Mr. Christie is not eligible to vote as he lives in London, but his sympathies are with the "No" vote. However, he said, "It's not a fair fight. Which side are you going to feel good about being on -- the moaning woman or the positive, sunny, hopeful message?"

Neither side is allowed to spend more than $2.5 million on marketing during the official campaign period, which is limited to May 30 through Sept. 18, so social media has become the chief battleground in the fight to be heard on a budget.

Jane Bellard, head of social at agency Johnny Fearless, pointed out, "The 'Yes' camp seems to have a tighter social media presence and fewer, bigger profiles. Everything about 'Yes Scotland' is called 'Yes Scotland,' from the hashtag to the Facebook page and Twitter feed. The 'No' camp has @togetherdarling and @UK_Together, but they use #bettertogether as a hashtag."

Agency We Are Social looked at the main Twitter hashtags surrounding the vote in the last month, and found that the 'Yes' hashtags -- #indyref, #voteyes and #yesscotland -- dominated 93% of the conversation. Ratings by social media analytics company Topsy found that sentiments for Tweets in the last month were 79% positive for 'Yes,' and 63% positive for 'No'. 'Yes' has 70% more fans on Facebook and double the number of Twitter followers.

Chris Applegate, senior creative technologist at We Are Social, who lived in Scotland for many years, said, "The 'Yes' campaign has an easier task. In social there are more opportunities to challenge the status quo than to maintain it. But the 'No' campaign suffers from a lack of imagination. While [the vote is] a serious issue, to cut through on social platforms you need to create naturally shareable content, rather than just broadcasting soundbites."

The "No" campaign has been boosted by more, higher-profile celebrities than its rival. Those in favor of keeping Scotland in the U.K. include Paul McCartney, David Bowie, Annie Lennox, Rod Stewart, Emma Thompson -- and J.K. Rowling, whose tweets could have taught the "No" team a thing or two about campaigning. They include "People before flags, answers not slogans, reason not ranting, unity not enmity #bettertogether."