Jonathan Mak Long never thought his tribute to Apple founder Steve Jobs would go viral, much less lead to his spearheading a design for Coca-Cola.

The image by the 20-year-old student from Hong Kong -- two hands in the shape of Coke's iconic white ribbon passing a bottle -- premiered this past weekend in bus shelters and elevators in Shanghai. And the fresh design, part of Coke's global "Open Happiness" campaign, has caught the attention of top executives at the beverage giant.

"It's got unusual, intriguing stopping power," said Stephen Drummond, director-content and creative excellence for Coca-Cola in Asia Pacific. "Everyone's responded with a sense of , 'Wow, that 's a different, intriguing spin on something so iconic and so familiar.' Just for that reason it engages people. Of course the message of connection and friendship with the brand at the center comes through very clearly."

The design could be used in markets outside of China, though nothing is confirmed because it's still so fresh, Mr. Drummond said.

Mr. Mak, a second-year communication design student at Hong Kong Polytechnic University, described his involvement with Coke as a "happy accident." The design for Mr. Jobs was something he had created and posted to his blog in August 2011, when Mr. Jobs stepped down as CEO. Mr. Mak did not expect it to go viral when he reposted the image, featuring the Apple logo with Mr. Jobs' silhouette making up the "bite," after his death in October 2011.

Graham Fink, chief creative officer of Ogilvy & Mather China, was on vacation in London when Mr. Jobs died and was captivated by the visual tribute, which was published in several British newspapers. They said only that that it was "designed by a Hong Kong student."

"Because we didn't know the college, it took quite some time to get hold of him," Mr. Fink said. "I had my assistant in Shanghai calling all the colleges in Hong Kong."

"We went through his portfolio ... his book was beautifully simple," recalled Mr. Fink, who said he has a passion for nurturing young talent. "I said to him, 'Look, we must keep in touch. I'd love to help you in any way that I can.' "

In February, Mr. Fink offered Mr. Mak an assignment that he had just presented to his creative team. The brief was simply: "Sharing a Coke." 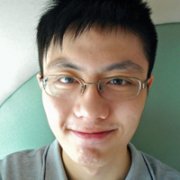 "I think the way I approached the poster is quite similar to the Steve Jobs Apple logo," Mr. Mak said. "I enjoy making visual puns. ... I don't want to say it's my style, but I do enjoy combining elements together to create a joke almost. It captures people's attention. These kinds of images are quite appropriate to advertising. It takes a second to get, and then there's an 'aha' moment."

Mr. Mak was paid for the work, though he declined to disclose the amount. He's currently on an exchange program at the Cologne International School of Design in Germany and said his friends, who knew about the project, tease him when he complains about the high cost of living in Europe.

Interestingly, the brief was not an official assignment for Ogilvy. Leo Burnett is the Coke brand's agency of record in China, and Ogilvy is one of Coca-Cola's roster agencies, working on several brands, including Fanta.

"Ogilvy took the initiative and totally surprised us," Mr. Drummond said. "Sometimes these ideas pop up out of serendipity, it's very much on-brand and on-brief." Coke wants to be "open to ideas that come from anywhere and everywhere and embrace it," he added.

Martin Murphy, managing director-global brand management at Ogilvy & Mather, Shanghai, said, "We are often thinking about ideas and approaches that could help our client's brands, even those brands outside of our portfolio. This specific initiative came about through some internal brainstorming on iconic messaging."

It's not clear how the staff creatives at Ogilvy China feel about having a student steal their thunder. But Mr. Fink said he considers it a dose of healthy competition.

"The way creative departments work these days, ideas can come from anywhere," he said. "You want anything that makes people work better, faster. There are a lot of great people out there, especially in China. The whole country is learning about [advertising]. ... There's a huge opportunity for us to find these people."

Mr. Mak is focusing on finishing his studies and doesn't know yet whether he will go into advertising. He stressed, though, that he was grateful for the opportunity and hopes to continue working with Mr. Fink.

Mr. Mak had a message for his Tumblr fans: He's posting again after retrieving the MacBook he left on a German train.