Markets Outside U.S. Capture 61% of Spending. New No. 3 Ad Market: China
READ THIS NEXT
Dispatches from the panicked GDPR frontline

CHICAGO (AdAge.com) -- The United States accounts for 5% of the world's population, 20% of global GDP and 34% of total worldwide advertising, making the U.S. by far the largest ad market. But if you want to reach the remaining 95% of consumers, what do you do? Go global.

The Top 100 global advertisers invested 61% of their measured-media budgets outside the U.S. last year, according to Ad Age's Global Marketers, a study covering 96 countries, territories and regions.

Regardless of their home base, these multinational marketers advertise where they see opportunity for growth.

They are betting big on one country: China. It accounts for 20% of the world's population, 13% of global GDP and -- for now -- just 5% of total worldwide advertising. But ad spending is growing fast. Publicis Groupe's ZenithOptimedia forecasts that China in 2011 will displace Germany as the world's third-largest ad market, coming in behind the U.S. and Japan.

One global advertiser stands out in China: Fast-food seller Yum Brands (parent of KFC) last year allocated 27% of measured spending to that market and generated 31% of its worldwide revenue from mainland China.

Among the 46 U.S.-based marketers on the Global 100 roster, 12 firms do more than half their ad spending abroad, largely tracking with where they generate revenue and expect to find growth. 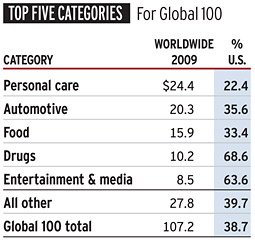 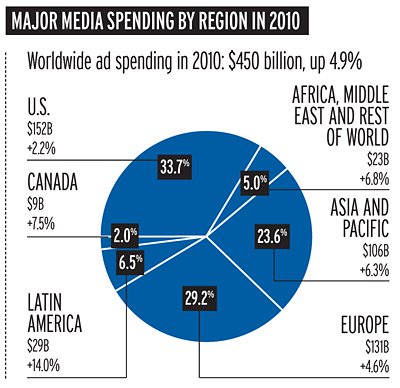