Facebook Is Most Popular Destination; WhatsApp Attracts 57% Of Brazilian Networkers
READ THIS NEXT
Dispatches from the panicked GDPR frontline
world cup
Credit:

As the U.S. prepares to play Belgium in its first knockout game of the World Cup 2014, a survey shows that U.S. audiences are not only watching the tournament in record numbers, they are also engaging with it on social media even more avidly than the soccer-mad Brazilians and Brits.

Even President Obama is getting involved – he tweeted his support for the U.S. team and watched the last U.S. game, against Germany, on board Air Force One . And the U.S. team's 2-2 draw against Portugal, played on a Sunday, was the most-watched soccer game in American history according to Nielsen, with 25 million TV viewers. 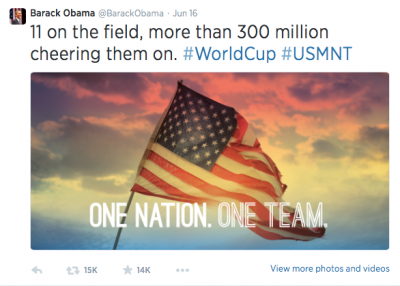 GlobalWebIndex asked fans in all three countries on day one of the tournament about their plans for watching and discussing the matches. Based on about 1,000 responses, the online research firm found that 51% of U.S. audiences would be turning to social networks to see what other people are saying about the matches – a higher proportion even than Brazil (50%) and the U.K. (44%).

Jason Mander, head of trends at GlobalWebIndex, said, "It's surprising how engaged the U.S. audiences are. It's the power of national sport and the benefit of being in a similar time zone to Brazil, plus [head coach] Jurgen Klinsmann is doing a good job of rallying support."

Facebook is by far the most popular destination for American viewers, with 95% of U.S. respondents saying they would use the site; 65% said they would turn to Twitter. A quarter planned to use Google+ and Instagram.

Mr. Mander added, "Facebook is still seen as the social hub in the U.S. -- it overarches all social networking behaviors. You might have expected Twitter to be the network of choice, but Facebook was top in all three countries." 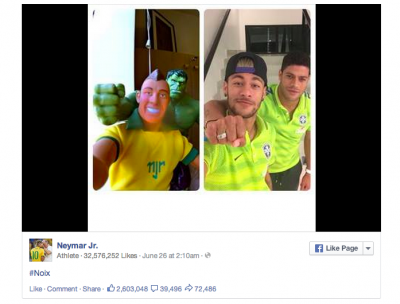 The World Cup is the first event – sports or otherwise – to top a billion interactions on Facebook (which it did between the opening game June 12 and June 29). During a single match between Brazil and Chile, which took place on a Saturday, more than 31 million people had 75 million interactions (posts, comments and likes). Brazil has also generated the most-liked picture so far, a shot of two of its star players, Neymar and Hulk.

In Brazil, 57% of respondents said they communicated about the World Cup using WhatsApp, demonstrating the popularity and global potential of the free instant messaging service, which Facebook bought for $16 billion in February. In the U.S., only 12% said they were headed to WhatsApp, and 28% in the U.K.

GlobalWebIndex also found that more Americans than Brazilians or Brits planned to check news or sports websites for the latest information about matches, although Brazilians were more likely to take a "selfie" of themselves watching a game.

GlobalWebIndex's ongoing study into the digital consumer is based on interviews with more than 170,000 internet users across 32 markets. For this survey, they contacted their network of respondents in the U.S., Brazil and the U.K. on June 12, the first day of the World Cup, and received about 1,000 responses. The sample included 421 social media users from the U.K., 414 from the U.S. and 231 Brazilians.