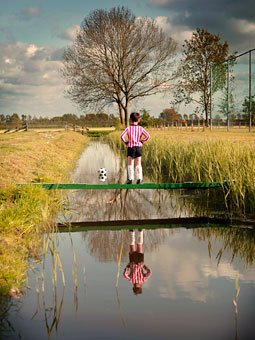 Lowe and Alfred will work together on several Unilever's brands including Calvé peanut butter.

The new agency will focus at first on reinforcing that key relationship with the Anglo-Dutch consumer goods giant. With a dual headquarters in London and Rotterdam, the Dutch market is important to Unilever, and the marketer is believed to have wanted a more active presence from Lowe, which until last year was part of DraftFCB's Dutch office. Both Lowe and Alfred are bringing a similar amount of Unilever business to the new entity, and they will now work together on brands including Rexona, Knorr, Axe, and Calv? peanut butter.

"The first thing we have to do is make this work for Unilever," said Tony Wright, chairman of Lowe and Partners. "They have been a supportive participant in this and shown faith, but we hope it will also be an attractive model for other international clients. Over-centralization in London can be a weakness for international agencies. [email protected] is an opportunity to introduce a truly European perspective."

He said the agency's unusual name "is very contemporary but also a literal descriptor of the partnership between Lowe and Alfred ... in the Netherlands, you now find Lowe at Alfred."

Lowe is in the process of reshaping the Interpublic Group of Cos.' micro-network under Mr. Wright. In the U.S., Lowe was merged with another Interpublic shop, Deutsch. And a year ago, Lowe paid $40 million for U.K. agency Delaney Lund Knox Warren, which it merged with Lowe's London agency. Later in the year, DLKW Lowe lost its biggest account, Halifax, worth $40 million, and last month executive creative director George Prest quit.

However, Mr. Wright said "London has been the smoothest thing I've been involved with. ... We've won [retailer] Halfords and COI [government] business and we're on some pitches."

Before that, Lowe set up Lola Madrid, to bring Latin creative flair to Unilever and other clients, but a number of key execs, such as Fernando Vega Olmos, soon defected to rival Unilever shop JWT.

Alfred was started four years ago by two former Lowe employees, managing director Marcel van Wing, and creative director Aad Juijer. The agency has a client roster of more than 20 Dutch and international brands, 25 staff and revenue of around $5.5 million.

The agency will continue to exist as a separate entity for domestic Dutch clients including United Biscuits, Heineken, Bank of Scotland and Royal Friesland Foods. "Their feisty, independent positioning is important for the Dutch market and we don't want to mess that up," Mr. Wright said.

"This all started because of Unilever," Mr. van Wing said. "We have worked with them since we started four years ago, but we came across opportunities that we couldn't seize because we were not connected to Lowe. The Unilever management has supported our discussions. We know Lowe --and Tony -- very well and we share a philosophy on how to build a network on strong local propositions."