Ebuzzing and Teads Team Up to Push Into U.S.
READ THIS NEXT
Dispatches from the panicked GDPR frontline

Two major players in online video advertising, Ebuzzing and Teads, are merging to create a new company with plans to list on the NASDAQ in 2015. 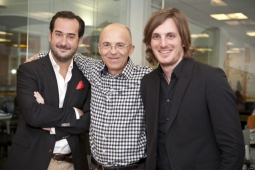 Pierre Chappaz, founder of Ebuzzing, and president and CEO of the new group, is a well-known French businessman – he also founded comparison site Kelkoo, which he sold to Yahoo for $650 million ten years ago. He said, "There is not enough instream inventory, so we invented outstream to run in social feeds, between paragraphs in articles, and in apps. Twitter is going the same way with video advertising, but we are super premium."

The combined Ebuzzing and Teads Group, based in Luxembourg, will work with both marketers and publishers, combining their areas of expertise in a deal which represents the start of consolidation in the fast-growing online video advertising market.

Ebuzzing, led by CEO Bertrand Quesada, distributes video advertising for clients including Evian – for which it distributed the popular "Roller Babies" and "Baby & Me" videos – Samsung, Adidas, Heineken, Acer and LG.

The Teads video advertising platform manages video inventories for 26,000 online publishers, including CNBC, The Financial Times, Forbes, The Economist, The Guardian, Le Monde and La Repubblica. It creates and operates private marketplaces for its publishers through which they can monetize video advertising in either a programmatic or a traditional way.

Together, the companies aim to create a "Criteo for online video." Criteo, an online-ad retargeter, filed for a $190 million IPO in September and saw its stock jump more than 30% on the first day of trading on Nasdaq. Pascal Gauthier, who was COO of Criteo until last April, will be on the board of the new company.

Ebuzzing Tead Group's biggest markets are currently France and the U.K., but they are pushing into the U.S. with recently-opened offices in New York and Miami, and another planned for Chicago. Asia is currently serviced from South Korea, but there are plans to expand there as well.

Mr. Chappaz explained why the new group plans to list on the Nasdaq in the U.S. rather than France or Luxembourg. He said, "It's important because the [U.S.] analysts understand the value of what we do – the value of advertising inventory and the creation of new inventory."

Loïs Soubeyrand, co-founder and CEO of Teads, said in a statement, "Our video ad platform [allows] clients… to monetize all types of content with video advertising. Our plan is to double our R&D staff by the end of 2015 to further increase our technological lead and bring additional innovations to the market."

The Ebuzzing and Teads Group will have 300 employees in ten countries, including a 100-strong research and development team in France. Their combined turnover in 2013 was $70 million and is expected to leap to $100 million this year.

According to Cap Gemini Forester Research, online advertising reached $5 billion globally in 2013, and is expected to hit $8 billion next year.