Once upon a time, Facebook had rivals all across the world. But one by one, they have all been vanquished. Hyves in the Netherlands is no longer No. 1, the VZ Network in Germany has been displaced, and even mighty Orkut in Brazil has recently found itself in the No. 2 spot.

So while it might be reasonable to expect that Russia's home-grown social network, Vkontakte, will one day experience dwindling user numbers and reductions in time spent on the site, there are clear reasons for considering it a special case.

Sometimes wrongly dismissed as just another Facebook clone, Vkontakte, which means "in touch," has an incredible level of engagement with its users.

The latest ComScore data for Russia (from March 2012) shows it is well ahead in terms of average daily visits and average visits per user. Similarly, in the Ukraine, GFK data reveals that 43% of Vkontakte users check updates several times a day, compared with just 18% of Facebook users.

Vkontakte has 40 million unique users in Russia, compared with Facebook's 11.9 million unique users and rival Russian network Odnoklassniki's (meaning "Classmates") 31.5 million unique users, per ComScore. It built this dominant position partly by being first to market in the country, launching in fall of 2006. Vkontakte grew rapidly while Facebook, until 2008, was held back by its lack of a Russian language site. 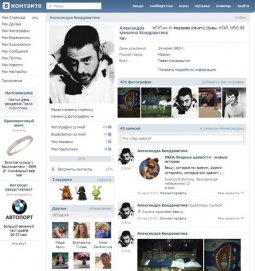 Screen grab of a Vkontakte profile.

At the heart of its recent success, however, is its ability to turn Facebook's global solutions into more relevant applications for this very specific local market. Every time Facebook develops a new function, Vkontakte adapts it for the Russian-speaking market, building engagement and retaining its competitive edge.

But the truth is that without Facebook, Vkontakte would not exist in its present form. It needs the Facebook interface, its technology development and social-design creativity. Any development Facebook introduces is quickly adopted and made more relevant to the site.

Vkontakte has lost another advantage now that Facebook communicates in Russian, but the Russian site benefits from what might generously be termed a more lax approach to copyright than Facebook.

Content is becoming a much more significant part of the social-media space, and Vkontakte allows users to watch movies (including ones not yet released to DVD) or listen to music for free within its walled garden, dramatically increasing time spent on the site. Facebook, by contrast, might only have official clips from movies. ComScore data show that its video service attracted 12.6 million unique users in March 2012 and its music service attracted 11.2 million unique users.

Vkontake allows users to record notes, audio albums and playlists. It also offers the ability to host audio and video files within groups and personal pages, share text documents and write personal notes and share them with friends, like a blog. Sitting at the heart of a Russian language internet ecosystem, Vkontakte reflects the cultural and political influence of the country and extends to Ukraine, Belarus, Kazakhstan and beyond.

In some of these markets, Vkontakte has built its powerbase by being cooler and smarter than its local rivals. In Ukraine it benefited from surge in users numbers when rival Odnoklassniki temporarily started charging for access. The social network's youthful users decided Vkontakte was cooler and decamped en-mass.

While Facebook was able to appeal to Germans and Dutch via its English language interface before it became localized, far fewer Russians speak English, and most Russian-speaking countries reference a sphere of influence where connections are more likely to be in countries that were formerly part of the Soviet Bloc.

Vkontakte's ability to resist the rise of Facebook is a direct contrast to the former social leaders in Germany and the Netherlands. By aping Facebook so closely, Vkontakte ensures that the global leader's strengths are its strengths and by adapting to local needs, protects itself from Facebook's weaknesses. (Vkontakte won't follow Facebook into the stock market; founder and ceo Pavel Durov postoned plans for an IPO indefinitely after Facebook's disastrous debut).

The approach of both Hyves and the VZ Network was different. Hyves is a semi-closed network and its API connections were comparatively hard to work with, so some crucial innovations did not come fast enough or at all.

Its failure to create an international platform cut Hyves off from users abroad (important given the international outlook of many Dutch consumers), and it also experimented with ad formats that blurred the line between real content and commercial activity, annoying users.

The situation in Germany was similar. The VZ Network never provided a developers' area to encourage external development and, like Hyves, failed to gather as much benefit from outside development as Facebook.

Facebook also benefited from brand promotion in both countries. Its great marketing potential (as well as its ability to run multimarket campaigns without incurring massive costs on bespoke development) helped position it as the leading network in both countries.

One thing that we can be certain of is that Facebook will be exerting strenuous efforts to extend its foothold in Russia and surrounding countries as it looks to top 1 billion global users.

If Facebook wants to overtake Vkontake, it will have to recognize that its Russian rival has successfully found a way to provide local users with a local solution. It will have to find a way to allow learn to adapt to cultural differences, rather than simply continuing to develop a platform for the masses, built top-down from California.

Ivan Fernandes is global director of social-media technology at MediaCom

Ivan Fernandes
View all articles by this author