WPP Is Lead Deal Maker With 54 Acquisitions In 2013

WPP was the most active buyer in marketing communications last year, closing 54 deals, according to M&A advisers Results International. The next biggest player was Publicis, with 19 deals, followed by Dentsu Aegis at 16. Interpublic was the biggest spender in mobile, with three of its eight deals coming from the sector. Only seven deals came under the social media banner, of which five were made by WPP.

Jim Houghton, a partner at Results International, said, "There were no gangbuster deals in 2013, like WPP [buying] AKQA or Publicis and LBi. Instead, there were a lot more early-stage tech deals, and quite a few that were about strengthening management teams. The other big driver was geography, consolidating the supply chain for clients."

Mr. Houghton predicts that the rate of deal-making will accelerate massively in 2014. He said, "Social will be a big driver -- marcoms have not got it at enough scale. The big networks have been trying to do it through PR, but it's not really working. There are quite a few social networking agencies of about 50-100 people – that's a good scale to bring into an existing brand, almost as a client services team." 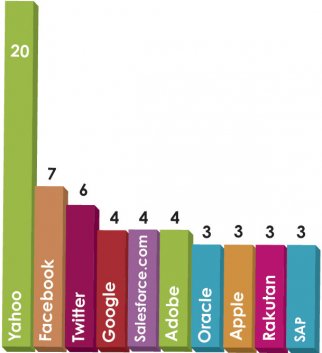 Ad tech and digital companies that did the most 2013 acquisitions

Among the ad technology and digital media companies, Yahoo was the most active with 20 deals, the biggest of which was the $1.1 billion Tumblr acquisition. Facebook came second with just seven, but has already made up for that with this week's $19 billion acquisition of WhatsApp, indicating that 2014 is set to be a bumper year.

Mr. Houghton said, "People are trying to say it's not like 2000, but it is a teeny weeny bit like 2000. I've a suspicion that the IPO market will go crazy this year. There's a huge amount of pent up equity not being invested."