'A Mind Is a Terrible Thing to Waste': An Iconic Campaign Turns 40 | Ad Age
Skip to main content
Sign In Register

'A Mind Is a Terrible Thing to Waste': An Iconic Campaign Turns 40

Celebrating a Successful Effort $1 Billion and 350,000 College Students Later
READ THIS NEXT
How restaurant chains are duking it out to be the best in their categories

The business of marketing is always about the future, always moves with and (when we’re really insightful) ahead of consumers. Campaigns often reflect a moment in time and so disappear as their relevance recedes. Yet every once in a while, we connect to the soul.

And then, of course, there is “A Mind Is a Terrible Thing to Waste.” Today, Y&R joins UNCF in celebrating its 40th anniversary -- 40 years and still going strong.

The line, as you know, has seeped into our culture’s vernacular. It’s been appropriated, copied, parodied and mangled in the retelling. Who of a certain time and place can forget former U.S. Vice President Dan Quayle’s tongue-tied tripping over the line, which he recalled as “What a waste it is to lose one’s mind”? The real line was so ubiquitous and so beloved, that his faux pas was banner news that day and struck a note of blasphemy that was heard around the world.

“A Mind Is a Terrible Thing to Waste” has become emblematic of some of the best values of America -- a belief in equal opportunity, in education, in human dignity and hope. And some of the best values in advertising, too: the timelessness of great emotional creative that’s rooted in insight, in emotion, in a great story that has the power to create a legacy.

So in thinking about this celebration, from what it says about marketing to what it says about social movements, I think the historical context is important to remember. Our client, UNCF President Michael Lomax, has pointed out that when the campaign was created, the idea that African-Americans should attend college was neither familiar nor widely accepted. The country was in the throes of wrenching social upheaval -- civil rights, the Vietnam War, the feminist awakening -- and views were both partisan and passionate.

In this climate, a UNCF board member thought that maybe advertising could have a place in helping raise awareness, so that UNCF could raise the funds it needed (and still does today) to drive its mission to help African-American students get the placement and funding for higher education. The board member, Polaroid executive Peter Weinsburg, brought UNCF’s then-leader Vernon Jordan to Y&R’s chairman, Ed Ney. The two began a friendship -- which lasts today -- and Ed suggested going to the Ad Council to get its weight behind the effort, too.

Then the agency got to work. As we do for every client, we immersed ourselves in the facts, then mined for the meaning. Rather than play to the fiery oratory and polemics so much in currency then, we believed in a more universal, human truth. Our gut told us that in making it wider and broader, we would make it deeper and more resonant. But even we could not have predicted its endurance beyond the massive social movements that helped it take flight and the advertising trends that it continues to transcend.

The first year “A Mind Is a Terrible Thing to Waste” appeared in ads, UNCF raised $10 million—a giant leap forward for its fundraising. Over its 40 years, through numerous evolutions, the work has managed to garner $1 billion in donated ad support. But it is better judged by the lives it has touched. Since 1971, UNCF has put more than 350,000 African-American kids through college. Both UNCF and the line that has become an identity with its mission are still hard at work today. UNCF’s work -- and ours -- is clearly not done.

There are, of course, more than a few lessons here. Our work for UNCF is a great reminder of what our industry does at its best -- find the human truths, then artfully transform them into powerful, emotional ideas that persuade and motivate. That’s what we all aim to do for our clients. On this day, however, I am also reminded of the power of our business to do good, our obligation to get involved in our community as corporate citizens and the tremendous reward of doing so.

Our work with UNCF is so much a part of our culture at Y&R that every generation since we started our work for UNCF has its own relationship to the work. The spot that is indelibly etched in my mind is the one I watched being shot: Maya Angelou reading her iconic poem, “Still I Rise,” against a sea of the blue caps and gowns of African-American students, rising at their graduation:

Into a day break miraculously clear

Bringing the gifts my ancestors gave.

I am the hope and the dream of the slave.

And so I rise

A mind is a terrible thing to waste. 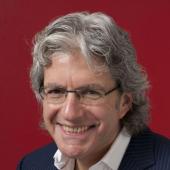 David Sable
David Sable is global CEO at Y&R.
View all articles by this author