Cramer-Krasselt, Milwaukee, is working on getting parents more involved in their kids' education. The agency is partnering with COA Youth & Family Centers to set up interactive displays -- dubbed "guerrilla classrooms" -- around Milwaukee. 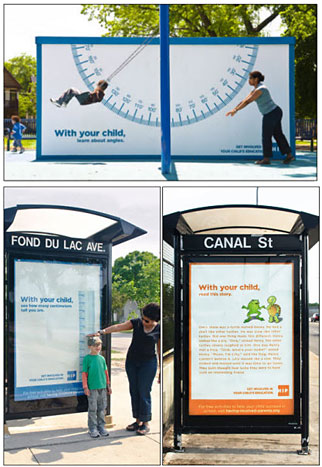 In addition, the pro bono campaign includes radio and out-of -home advertising, with four Milwaukee County Transit System buses wrapped as destination experiences, including a safari bus and a submarine. Each piece of the campaign carries the "With your child" messaging and directs people to the website having-involved-parents.org.

"To reach this dual target -- both kids and their parents, many of whom may have had a negative education experience -- we knew we had to reach them where they are, spark their imagination and offer approachable, yet valuable 'learning lessons,'" said Chris Jacobs, senior VP-executive creative director for C-K, Milwaukee, in announcing the effort. "Advertising alone wouldn't cut it. The 'With Your Child' campaign puts an entirely new spin on the idea of the classroom, bringing learning opportunities into everyday life in a way that is both high-impact and high-involvement."

The project supports the Having Involved Parents program, a partnership between COA and Milwaukee Public Schools that was created to tackle the city's public education challenges, putting parental involvement coordinators in 35 schools, most in the inner city, to work with parents and improve their interaction with their children's education both at school and at home on a daily basis.

Parental participation in education is one of the most important factors in a child's academic success, according to the agency, yet many parents don't know how to deal with the system due to challenges they experienced while in school. Milwaukee, the fourth poorest city in the U.S., has one of the country's lowest-performing school systems, according to the agency. But University of Wisconsin-Milwaukee research found that at Milwaukee's O.W. Holmes School, students with engaged parents were four times less likely to be reading below their normal level by one or more grades.