Have you ever wanted to play with big-time creatives like the partners and chief creative officers of Crispin, Porter+Bogusky? Lunch with industry legends Jerry Della Femina, George Lois and Allen Rosenshine? Play ball with marketing's big league by cheering on the New York Giants with team CMO Mike Stevens? 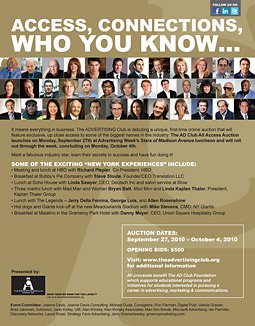 The Advertising Club of New York is offering you your chance. Starting Monday, Sept. 27, the Ad Club is opening online bidding in its first All Access Auction, featuring 29 New York experiences with high-profile executives in media, marketing and advertising. The auction will raise funds for the Advertising Club Foundation, which supports educational initiatives, scholarships and mentoring programs for students looking to enter the business.

The event will open with live bidding for two of the 29 packages at the Ad Club's annual Stars of Madison Avenue luncheon, kicking off Advertising Week in New York: Karaoke, North of the Border, With the Three Amigos, offering dinner with Crispin, Porter's Andrew Keller, Jeff Benjamin and Rob Reilly, followed by karaoke, and Lunch With the Legends, a lunch at the Four Seasons with Della Femina, Lois and Rosenshine.

"The idea is to have some fun with these experiences and generate some excitement in getting to interact with some of the stars of the business," says Gina Grillo, president-CEO of the Advertising Club of New York. "This is a really good opportunity to shine the light on some of the power players, the people who are redefining our business and the people who defined our business.

A preview of the experiences up for bidding is available at www.theadvertisingclub.org, with traffic being redirected to an eBay site once the auction opens. The online bidding for each opportunity, which includes a meal and time with various big-name people in advertising, marketing and media, will run from 11 a.m. ET, Sept. 27, to 11 a.m. Oct. 4.

The opportunities offer time with a number of people in the business. "It's really running the gamut from people who institutionalized our business to people who are revolutionizing our business," Grillo says.

The funds raised by the auction will support foundation scholarships for the next year, with an emphasis on expanding diversity in the industry. Since it was founded in 1986, the philanthropic arm of the Ad Club has funded more than $1.5 million in grants and scholarships.

"We care very much about supporting the next generation," Grillo says. "We put a lot of time and effort behind this program to do something where people can be bidding on something exceptional, but it's also something good for the business at large.

"It's also pure fun," she adds. "We wanted to inject a little bit of fun back into the business and provide a service to those in the business."