The Season of Giving | Ad Age
Skip to main content

The Season of Giving

How Companies Are Helping Others for the Holidays
READ THIS NEXT
How restaurant chains are duking it out to be the best in their categories
24 /7 Real Media staffers served 200 lunches as part of the company's day of giving back for the holidays.
Credit:

Earlier this month, 24 /7 Real Media's New York staff spent the day giving back to their city. Working with New York Cares, 140 people from 24 /7 worked on five activities to help others.

Employees spent the day serving lunch at Trinity Lower East Side Lutheran Parish in the East Village, feeding 200 people; guided 50 sixth graders through a scavenger hunt in the American Museum of Natural History; painted the six-floor stairwell and created seven wall murals at the Abyssinian House, the only shelter in Manhattan that provides full apartments for 25 families in need; hosted a bingo party for 25 seniors at a housing community in Harlem; and ran a Math Olympics for 70 fifth graders at the first English-Mandarin dual-language public middle school on the East Coast.

The staff celebrated its efforts with a holiday party at the end of the day.

A new charity, #12DaysOfGiving, is challenging people to give. From Dec. 13 to 24 , 12 influencers are writing about their favorite charities on givingkicksass.com. People are asked to follow the posts through @12DaysGiving and share them, to search #12DaysOfGiving for updates, to "like" the effort on Facebook and, finally, to make a donation on Crowdrise.

The effort was created 36 Social Media Adventure founder Joseph Ranseth; Katie McCormick, digital marketing director at New York & Co.; and Huffington Post blogger Amy Neumann. They created 12DaysOfGiving to invite people to "join in a movement of giving back and doing some good."

AKQA is working with the nonprofit Pencils of Promise on a new fundraising and awareness initiative, Made With Pencils. The effort, designed to promote global literacy and education, has brought together celebrities, athletes, artists, designers and visionaries from around the world to donate pencil works to auction off. Participants include Katie Couric, rapper Lil Jon, rock band Coldplay, singer Mariah Carey, basketball star Shaquille O' Neal, interior designer Jonathan Adler and artist Joe Fenton.

People can bid for the various works in a series of online auctions that started Nov. 30. One hundred percent of the donations from the auctions will go to developing schools.

In addition, Made With Pencils offers a Pencil Shop and Made By You Gallery . The Pencil Shop sells custom-made Faber Castell pencils that fund a specific element of education. Each level shows the range of support donations provide, ranging from a $25 pencil that provides funds for one year of education for one child to a $25,000 pencil that covers the cost to build an entire school. Users can use pencils from the Pencil Shop to make their own creations to upload to the Made By You Gallery , which will be rolled out in the next phase of the website.

"A pencil is the most basic tool of inspiration and imagination," said Rei Inamoto, chief creative officer at AKQA, in announcing the partnership. "We're proud to work with Pencils of Promise to show the world that the most amazing thing a pencil can do is to build a school that will create the next generation of creative thinkers." 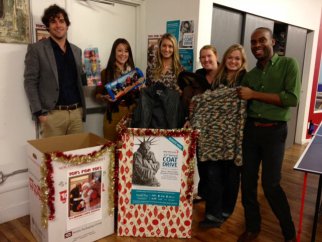 DiGennaro Communications is launching staff-driven philanthropy efforts this holiday season.
The employees of DiGennaro Communications, New York, are launching staff-driven philanthropy efforts at the PR firm this holiday season. They're starting with two charities: New York Cares and Toys for Tots through the U.S. Marine Corps.

For New York Cares, staff members have been participating in a coat drive, donating gently used winter coats and jackets at the office for New Yorkers in need. For Toys for Tots, employees are collecting unwrapped new toys.

"This time last year, our agency was in a very small, cramped space near Canal Street . Now we're in a beautiful loft in one of the hippest neighborhoods in the city. Our staff size has doubled to about 30 people," says Samantha DiGennaro, the firm's founder and CEO. "I'm grateful for every one of my employees, their enthusiasm, hard work and their dedication to our client partners. It's been a great year, and it makes me proud that the staff wants to make 'giving back' part of the DNA of DGC."

Color Rwanda With Hope was created to provide education for the 20,000 children born of rape during the 1994 Rwandan genocide. At the program's recent launch event, the original short film "Color Rwanda with Hope" was debuted, showing personal stories of Rwandans affected.

Employees of LBi Syrup created the multimedia project to try to capture the power of hope in terrible circumstances and pass that message around the world. Every $350 raised will support one child's secondary school education for a year. Foundation Rwanda is currently sponsoring the secondary school fees for 830 children and has set a goal of sponsoring 1,500 children in 2012.

Baltimore-based Planit is getting people involved in giving through its holiday card this year. The agency put the card, "Walking in a Would You Rather Winter Wonderland," on its Facebook page and is asking viewers to vote for one of two "would you rather" situations each day for seven days.

For example, on the first day, the agency asked its Facebook fans if they'd rather see Planit's interactive department taking a shot of Tabasco sauce, or its print department eating a spoonful of cinnamon. Tabasco won the most votes, and the agency's interactive team lived up to the challenge on Dec. 16.

The challenges run through Dec. 22 . At that point, Planit, an Ad Age 2011 Small Agency of the Year, will ask fans to vote for a charity that it will give to. The more votes it gets throughout the seven-day event, the more the agency will give.

About 500 people showed up in Speedos to run through Boston's Back Bay, raising $260,000 for Play Ball! Foundation.

"Our runners vary in age from 21 to 70, and include participants that travel from as far away as Nevada and Seattle," Ianelli said in announcing this year's event. "Last year, the event raised $234,000 for Hospitality Homes, Starlight Children's Foundation and Play Ball! Foundation. This year, we have a goal of raising $250,000, which we are proud to say will help us cross the $1 million mark in total funds raised 36 the SSRun."

By the end of the Dec. 15 event, the agency had raised more than $15,000 36 collecting online and from passers-36 . Donations are being accepted at SCCCarolsForKids.org through the end of the year.

"We're excited to take this event to the next level this year and raise a significant amount of money for children's charities," said Schafer|Condon|Carter CEO Tim Condon in announcing the event. "In this time of need for so many families, we believe this is truly in the holiday spirit."

Karen Egolf
View all articles by this author