Sometimes it takes a little youth culture to remind you why you got into advertising in the first place.

We found that out when my old friend John Benevento asked my agency,

Seiter & Miller, to host a group of seventh graders for a day. John ran the New York territory for WaMu until he retired a few years back. Since then, he's been working with the Castle Hill Middle School, a public school in the Bronx neighborhood where he grew up (attending rival St. Raymond School). John explained that the school's principal, Harry Sherman, is gung-ho about bringing the classroom into the real world for underserved kids. 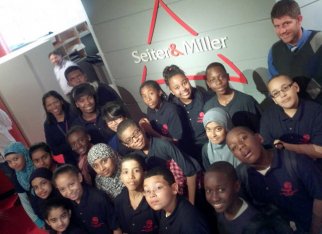 Seiter & Miller recently hosted a group of seventh graders from Castle Hill Middle School in the Bronx.
Despite its name, Castle Hill isn't exactly ritzy. It's located in a tough section of the Bronx where cultures collide. You couldn't get more multicultural than this bunch.

After a 45-minute intro to what advertising's about, we divided the kids into four groups to name and frame new products. We paired each group with two of our people. Team Stinko was to create a new shoe or sneaker, Team Zit was asked to work on a new candy bar or snack food, Team Vroom invented a new car and Team Nerd tackled a new app or social network idea.

Team Vroom came up with "YuGo Girl" as a name for its concept -- think plenty of mirrors and lighting for makeup application. Team Stinko wanted to build extra springs into their shoes for a little more height on the dunk moves. The other teams? Well, let's just say they went to their imaginations rather than science for new product ideas. The social app required a cellphone that could just about make breakfast for you.

I was surprised how quickly the kids grasped the concept of building an efficient media plan. We didn't have to explain the erosion of mass media; they got the idea of targeting and could composite people immediately -- who you are, what you'll like, what you'll buy and where to find you.

But most of all, the kids reminded us that advertising can be fun. There's no holdback to their imaginations. They swing out with abandon, and they play at it.

"The kids just lit up," says Abby Simmons, who coordinates Bronx school-business involvement for PENCIL, the organization that facilitates the partnership between John and the school and nearly 400 others like it throughout New York. "This is novel -- giving kids a chance to experience what it's like to work in advertising. Typically they're aware of sports, entertainment and the jobs their parents do, so advertising certainly wasn't on the radar screen. Now it is ."

Abby and her crew at PENCIL have 100 schools on the wait list for partners -- companies just like yours. You won't regret the call.

One of the cutest and brightest young girls in the class said to me in parting, "I am definitely working here when I grow up, Mr. Miller. But you'll have to pay me $10,000 a week."

Livingston Miller
View all articles by this author