You might have expected this year's Davos, the annual convening of the World Economic Forum, to have been an anxiety-ridden gathering of handwringing politicians, academics and corporate leaders. After all, 2016 hadn't gone as planned -- its political predictions were upended, new technologies threatened further disruptions and global economies continued to vacillate.

Yet the conference seemed infused with a sense of energy. This year's uber theme, Responsive and Responsible Leadership, echoed throughout each discussion. A hyperpolarized world can't become an excuse for inaction, which is why it is imperative that leaders respond collectively with credible actions to improve the state of the world.

And the time to do so is now. Our industry is perfectly poised to reinvent itself and face each challenge of 2017. So what can marketers learn from this year's Davos?

This year's Forum was buzzing about the recent market successes of artificial intelligence. But it also brought to light a lot of unknowns. Will AI cause pervasive job loss? And, per The New York Times' Thomas Friedman, what's the point of being human when machines think and act on our behalf?

The critical factors here are heart, purpose and values. Leaders have a responsibility to value the human contribution to the equation. No matter what AI can accomplish, it can't convey the emotional elements that make people feel and act.

The push for diversity was stronger than ever, but, despite the increased scrutiny, only 18% of Davos delegates this year were women.

In a luncheon for female leaders, Sheryl Sandberg reminded marketers of the collective power we hold. As the author of "Lean In," she shared her message with 2.5 million book buyers. But she asked our crowd, "How many people does a national ad reach?"

I moderated a panel with The Representation Project's Jennifer Newsom and FCB's Susan Credle as part of The Female Quotient, where we discussed why it's critical that leaders in the communications industry forge the way for women. If we put out stereotypical narratives, we're hurting the culture. If we put out positive, realistic ones showing women excelling in their fields, we will help change the ratio.

3. Bubbles are a problem, and siloing leads to myopia

During last year's Davos, many confidently predicted that Brexit would never happen and that Hillary Clinton would be elected president. This year, there was a lot of talk about the chasm between predictions and reality.

Are we so consumed with data that we're not investing enough in human analysis and conclusions anymore?

The industry has to fight this battle on several fronts. The first is acknowledging that -- from the awards we give to the conferences we attend -- we're often a choir that can't stop preaching. We've got to make an extended effort to get beyond our networks, decrease our dependence on data and solicit new points of view.

Richard Edelman used the Forum to unveil findings from the 2017 Edelman Trust Barometer. This year, the annual survey showed the largest-ever drop in consumer trust across government, business, media and NGOs. Edelman reported that "59% of respondents would believe a search engine over a human editor." These findings are a huge blow for communicators, and illustrate how important it is to work with facts, to be transparent and to be authentic to the brand.

As Thomas Friedman put it: "Trust is the only legal performance enhancing drug." It's a sentiment that's particularly true in the public service business -- we're simply unable to change minds without consumer buy-in.

5. Big business has an increasing power, and responsibility, to affect social causes

Ultimately, it was clear that the 2017 Davos Crowd was placing a lot of hope in the power of business. In the last year, many major players leveraged their economic power to take a stand on social issues, from immigration to LGBT equality. And that trend is growing.

But taking a stand must be more than lip-service. In order to have significant impact, there must be a long-term commitment. Just take a look at Salesforce as a shining example of a company that is making big, ongoing adjustments to fight back against pay inequity. In 2015, they conducted a review of compensation across job role, level and location, and adjusted for any unexplained differences, ultimately costing the company $3 million. And yet, they're willing to undergo the review again in 2017.

The Davos charge was clear: today's leaders must clearly identify their values, take a stand and commit to keep on standing. 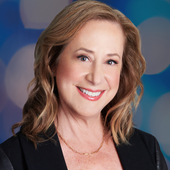 Lisa is president and CEO of the Ad Council, the national nonprofit which convenes the world’s best marketers to create public engagement campaigns tackling the most pressing issues facing the country. Lisa is an innovative leader with over 35 years of experience building, transforming and growing organizations. Previously with Viacom, Lisa launched and led Logo TV, the first cable network for LGBTQ+ audiences. She’s also held leadership roles at Verizon, Hill Holliday, and the Women’s Sports Network, which she co-founded. Sherman received the 2019 Matrix Award and was named the 2020 non-profit Marketer of the Year by the AMA.