How to Answer the Age-Old Question 'Will My Ad Work?' | Ad Age
Skip to main content
Sign In Register

How to Answer the Age-Old Question 'Will My Ad Work?'

When It Comes to Creating Impact, TV Is Still the Best Bet
READ THIS NEXT
Inside Apple's New Campus: No Childcare (But You Can Freeze Your Eggs)

"Will my ad work?" is the question that every ad man has obsessed about for over a hundred years.

"Will my ad be seen at all?" is a question you hear more often today, followed by "Will I still pay for it otherwise?" and "What will my ad run next to?"

It's a progress paradox: As advertising becomes more complex, we're asking more basic questions. They do, for sure, make great headlines: "The Viewability Crisis" is one. We wonder whether exposure to at least 50% of an ad for at least one second constitutes viewing. Should we double the standard to two seconds?

I believe we're not asking the right fundamental question. An ad works when it is emotionally impactful, memorable and moves consumers to action. The most meaningful but difficult question to answer is -- how much impact can you expect from advertising in different media? As the late Erwin Ephron was fond of saying, no media is good or bad independently of how much it costs -- for half the equation is in how much return it generates. Without impact, there surely is no return.

Advertisers that commission econometric analyses know the answer: By and large, they all agree that TV works, that radio works and that well-executed digital campaigns work.

But these kinds of analyses are famously hard to do. For most advertisers, the only practical way of answering the ROI question is to move money around until the results change -- hopefully in the direction you want. The change has to be significant, however, before you can drive a meaningful conclusion, and significant changes are scary.

The last such shift at the macro level involved ad dollars going from broadcast to cable TV -- a trend that gained momentum in the '90s. By adding lower-CPM cable spots, which also tended to increase reach, advertisers were able to stay on TV for longer periods of time. KPIs went up. Sales went up.

It's fair to draw a comparison between now and then. Isn't online video doing to TV what cable did to broadcast? If it is, the results won't be the same, for two reasons. First, cable TV ads are measured the same way as broadcast: through a long-established measurement standard that only gives an ad credit when it is seen entirely. However a viewer responds to a thirty-second spot on broadcast -- with excitement, indifference or surprise -- the response should be similar on cable.

Most importantly, the move toward cable TV happened gradually, allowing the supply of high-quality content to keep pace. There was never a "sudden glut" of money moving to cable, chasing limited quality inventory.

Today, if you ask those in the know, most will admit privately that ad dollars are moving to digital faster than digital's ability to deliver like-for-like results. The standards that were good enough for a nascent medium receiving small budgets are falling short of a key medium that's approaching one-third the total.

Those of us who are in the business of providing marketing solutions to advertisers, through a combination of TV and online video, can do more to level the playing field. We can start by showing why TV works: Its power to create emotions and change minds is still unparalleled -- on and off the commercial break. In general, the bigger the screen, the bigger the power.

But we also have to adjust to a world where consumers are watching video on a multitude of smaller devices, in smaller and smaller time increments, and offer marketing solutions that can leverage that trend. Where we can't do it alone, we need to find digital partners that can extend our reach while they gain the "multiplier effect" provided by TV. When we do this together, advertisers will be able to answer "yes" to the question they've obsessed about for over a hundred years: "Will my ad work?" 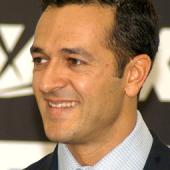 Hernan Lopez
Hernan Lopez is president and CEO of Fox International Channels.
Follow View all articles by this author