Media Portrayals of Women Are More Powerful Than the Word 'Bossy'

Olivia Pope and Murphy Brown Trump Playground Insults
READ THIS NEXT
Inside Apple's New Campus: No Childcare (But You Can Freeze Your Eggs)

This week Facebook COO Sheryl Sandberg, who famously advised women last year to "lean in," has launched a campaign that's become ubiquitous in social media. She wants people to stop applying the word "bossy" to little girls because it's never applied to little boys.

I don't know whether the "Ban Bossy" campaign, as it is called, will be effective in any way, but I do know that imagery, storytelling and portrayals of women in advertising and the popular culture are probably far more impactful on how society views women and girls.

In the 1970s, "The Mary Tyler Moore" show featured Mary Richards, a career woman over 30, unmarried and perfectly happy. In fact, her marital status had nothing to do with any theme or story line of the show, yet that aspect of the sitcom was considered revolutionary but only in retrospect.

The 1980s gave feminism and female friendships a southern accent in "Designing Women." By the 1990s, "Murphy Brown" stirred things up when that unmarried career woman, decided to have a baby without having a husband.

Contrast Mary Richards to the quartet of women in "Sex and the City." Though they were all monied professionals, also in their 30s, their stories had two themes: The pursuit of male partners in marriage or sex, but not necessarily for both.

The second decade of the 21st century brought us Olivia Pope -- a strong woman making her way in Washington, D.C.

All of these fictional women captivated our imaginations because their shows were well written and their characters so well defined that they felt like our friends, colleagues, relatives and perhaps even ourselves.

If the term "bossy" was applied to any of them, it probably wasn't an aspersion. Consider that the title of Tina Fey's 2011 memoir is Bossypants, the thought being that you're nobody until someone calls you "bossy."

Mass-media depictions affect our perceptions even if we're not aware that it's happening. Our favorite shows work on us much like advertising in that they create stereotypes or expectations about people's aspirations and behavior.

In advertising, Dove's "Real beauty" campaign conveys the disconnect between what the ad industry and other image-makers consider the paradigm of female beauty. The reality is that beauty is more elastic and contextual and can sometimes have nothing to do with physique.

The subtexts of TV shows and movies are less obvious but no less powerful in impact.

My 15-year-old daughter follows "Scandal." Ten years ago, a "fixer" such as Olivia Pope probably would have been written as "Oliver Pope" and played by a white male. People my daughter's age don't even stop to think about that. She recently tweeted that she wanted to be Olivia Pope when she grew up and used the hashtag "gladiator."

It's difficult to measure the extent to which these characters influence real-life people except to point out that life often imitates art. How they are depicted has larger implications for the average American woman. Here's why.

A 2012 university study with excerpted results published in The Atlantic said that both women and men had more positive views of women after viewing fictional content in which women were portrayed as strong, self-determining characters even if they were victims of violence in the story.

Let's face it. As image-makers working in advertising or entertainment, we have to believe that the content we create has an effect on the audience that consumes it. Otherwise, why would we be in these industries? For our daughters' sakes, let's understand that our fictional or aspirational creations have a long-term impact that transcends revenues.

Being called "bossy" is probably the least of our worries. 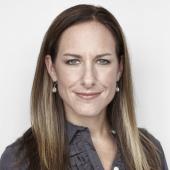 Stacy Janicki
Stacy Janicki is director of account management and senior partner at Carmichael Lynch, an ad agency based in Minneapolis.
View all articles by this author