Spoiler Alert: A Playbook for Marketing in the Era of Live Media | Ad Age
Skip to main content
Sign In Register

Spoiler Alert: A Playbook for Marketing in the Era of Live Media

GE Spends 92% of Its TV Ad Budget on Live Programming Like the Oscars
READ THIS NEXT
Drew Brees, PointsBet fake a lightning strike in search of brand attention

When the first Academy Awards were announced in 1929, a scant few hundred people viewed the 15-minute ceremony. Today, the Oscars are a must-watch event drawing millions of TV viewers and social media followers eager for glimpses of their favorite stars or the occasional acceptance speech gaffe.

As we're reminded every time we look at one of the many screens that shape our lives, the media world has changed considerably over the past nearly nine decades. For marketers, those changes have made live media events such as the Super Bowl and Oscars nearly unrivaled opportunities to strike advertising gold.

When it comes to high-quality programming, consumers have more options -- and more control -- than ever before. New platforms continue to fragment the landscape, streaming services are changing the way people watch programming, and attention is a dwindling resource.

With this in mind, GE shifted its media strategy three years ago to capitalize on what we can call "spoiler alert programming," targeting live sporting events and awards shows, as well as zeitgeist moments such as season premieres and season finales.

We stopped filtering for scale and, instead, focused on behavior and context. Our "Fallonventions" segment, which highlights kid inventors on "The Tonight Show," is an example of this, as was the placement of our self-depreciating "What's the Matter with Owen?" ads, which run during late-night television. Our decision to debut our latest Owen ad during this year's Oscar Awards show is a continuation of this approach.

We now invest about 92% of our TV ad budget on live programming -- approximately 36% more than the average advertiser.

And we see the difference in our results. Industrywide, live programming over-delivered primetime's regularly scheduled programs by as much as 416% among 18- to 49-year-olds in 2015. And, despite a small TV budget (certainly on the low end for a global brand), people continue to say that they saw our "Owen" ads everywhere.

When we began this approach, it seemed heretical. The industry supports a GRP-based approach -- hitting the maximum number of people at the lowest possible cost. It's a strong economic argument; however, behavior has changed dramatically. Fewer people watch linear television in a linear fashion. Bingeing, streaming, DVR'ing all give consumers ample opportunity to skip everything, except exactly what they want to see.

Some broadcasters are beginning to adapt. In November, for example, Fox became the first broadcast network to announce that it will no longer acknowledge or release live viewership ratings, except for live events like sports. As the company's executives smartly noted, the relationship between audiences and programming is more complex than ever. Overnight ratings aren't the only metrics that matter and changing the conversation starts with abandoning legacy modes of measuring.

We've been able to execute a different kind of media plan despite the prevailing models, thanks to a relentless focus on viewing behavior, plus creative and media partners who are willing to experiment and go the extra mile. Our teams maniacally identify the most engaging 30 seconds in the most engaging programs. And then we magnify those moments with programming on Snapchat, Twitter and other digital programming to create a bigger conversation with the community we want to reach.

The savviest networks and agencies are investing in the necessary infrastructure and talent to make these kinds of bespoke media plans easier to build. They'll ultimately create a new taxonomy for media buys that better reflects the motivation and the mindset -- not just the demographics -- of the watching audience. And they'll proactively cultivate digital communities out of the audiences that watch and engage in their programming. 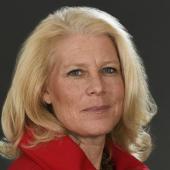 Linda Boff
Linda Boff is chief marketing officer at GE, where she is responsible for leading customer experience, marketing and brand for the company.
Follow View all articles by this author