It's Time for Our Industry to Take Action on Inclusion

Ad Club's Sponsorship for Women Is a Step in the Right Direction
READ THIS NEXT
Inside Apple's New Campus: No Childcare (But You Can Freeze Your Eggs)

Over the past few months, the discussion about inclusion and diversity in many industries, including marketing and entertainment, has escalated. Most recently, the overwhelming lack of diversity in this year's Oscar-nominee lineup really sparked an uprising of support.

As an industry we can relate, because it wasn't long ago when one of the hot topics after the Super Bowl was the lack of diversity in the ads. This year, however, it's encouraging to see that the situation has taken a turn for the better. Many media outlets celebrated the diversity of casting in Super Bowl spots, as well as campaigns' increased respect for women. Brands began to show an understanding that yes, women drink beer, too, and they're as aggressive in their fitness pursuits as men are -- and they don't have to be in a bikini to get the message across.

But for the benefit of our colleagues, friends, mentors and compositors -- for improved bottom lines and greater inspiration and creativity -- we must ensure that concrete measures do not get lost in the fold of discussion. As Viola Davis said herself, "Diversity is not a trending topic."

For those of us who believe in actively driving inclusion in our industry, the very public discussion about what efforts are working is exciting. But how do we move beyond talking about inclusion into the action that will make diversity a reality? On our end, The Ad Club of New York's I'mPart diversity initiative is launching a $100,000 investment in up-and-coming female professionals, along with hosting our inaugural Master Class Series -- the first of which will focus on women in advertising and related industries.

We're excited to undertake these initiatives this year, because we know this issue is important to our industry. And we know that we've never before had more widespread support -- the kind that is crucial to scale our diversity efforts. A recent study by PricewaterhouseCoopers, conducted in partnership with The Ad Club of NY, revealed that in 2015, 60% of respondents from advertising, marketing and media companies believed diversity and inclusion in the workplace are important, up from 42% in 2013.

Studies show again and again that companies with greater female representation at the board level and top management positions are more successful. A 2014 study by Credit Suisse showed that these companies exhibit higher returns on equity, higher valuations and higher payout ratios. They enjoy a greater diversity of thought and better connect with female consumers. If every country could match the gender parity of its best-in-region neighbor, the global GDP would add $12 trillion by 2025. Yes, trillion.

But we aren't doing enough to build the diverse business world that will result in that kind of prosperity. As 20-year-old Deutsch NY intern and Ad Club scholarship recipient Jermaine Richards said of his experience within the ad industry thus far: Diversity is a two-way street. Our industry is just as responsible for providing the tools needed for success as interns and professionals are for asking for them. Twenty years ago, there were zero female CEOs in the Fortune 500. According to a November 2015 survey by S&P Capital IQ, there are now 21. It took two decades to get to 4.2%. At this rate, the millennials' grandkids will still be talking about how to achieve gender parity.

Outside the C-suite, women hold 52.2% of all managerial and professional jobs, but only 22% of senior management roles. These numbers tell the same old story. Women have the desire and education to break into the business world, but are stymied when it comes to climbing to the top ranks of their company.

A first step toward inclusion and diversity is to look around us to see what is working. Inspired by the trailblazers that are already making strides, at The Ad Club of New York we want to drive our industry in the right direction by giving women the support and resources necessary to drive actionable change.

Our $100,000 sponsorship investment will send a select group of women in the advertising, media and marketing industries to the year's most prestigious industry conferences, all expenses paid. Every woman selected will be paired with executive-level mentors at each conference, who will serve as seasoned guides and networking partners. Our inaugural I'mPart Master Class Series will be a full day, hands-on workshop for female professionals of all levels, focusing on their development for more confidence, relationship-building, creativity, financial competency and strategic development.

These are the kinds of skills leaders of any gender must possess, but too often in our fast-paced industry, little time and effort are put into developing talent. To help them both excel in their professions and become well-rounded business leaders, we are bringing together the best and brightest minds in the corporate world to lend their expertise to tomorrow's female leaders. We encourage all female professionals in the industry to find out more about these programs and apply here or nominate someone for our $100,000 sponsorship and to join us at the I'mPart Master Class Series.

Let's work together to make 2016 the year we move beyond talk and into real action. 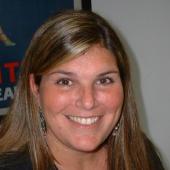 Gina Grillo
Gina Grillo is president and CEO of The Advertising Club of New York.
Follow View all articles by this author