Azteca's in the Running at Hispanic TV Upfront

Mexico's No. 2 Broadcaster Has Big Plans for U.S. Market
Azteca America, Mexico's No. 2 TV broadcaster, currently has 5% of the U.S. Hispanic audience, up from 2% just a year ago.
Credit: 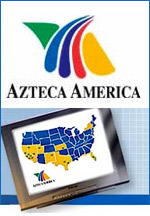 Azteca America, Mexico's No. 2 TV broadcaster, currently has 5% of the U.S. Hispanic audience, up from 2% just a year ago.
Upfront begins

Kicking off the Hispanic upfront last night at a presentation at the American Museum of Natural History, Adrian Steckel, who became president-CEO of Azteca America six months ago, pledged, "Our goal in the next 18 months is to get to a 10% share. We need you guys to believe in us."

Right now Azteca America has a 5% share of the U.S. Hispanic TV audience -- up from 2% a year or so ago, he said. On weekends, Azteca reaches 12% of the audience, "almost as much as Telemundo," Mr. Steckel said.

When TV Azteca, Mexico's No. 2 broadcaster, entered the U.S. Hispanic market five years ago, the network floundered. Univision cannily bought the TV stations Azteca hoped to build its U.S. network on, and Azteca had to launch with only a single channel in Los Angeles and coverage of just 16% of the U.S. Hispanic market. The company's business model -- to keep costs very low by recycling Azteca's Mexican shows and doing very little original programming for the U.S. market -- turned out to be a serious mistake.

Luis Echarte, Azteca's chairman, said that Azteca America now has 45 stations and reaches more than 83% of the U.S. market geographically and 70% of Nielsen's coverage of the Hispanic population.

"We can do product integration like no other network," Mr. de la Garza said. "You name it, we're going to do it."