For U.S. Hispanic agencies, the search for a top creative often extends to the entire Spanish-speaking world, with Argentina and Mexico the main hunting grounds.

Alvar Sunol, who will join Miami-based Alma as SVP-executive creative director from Bassat Ogilvy in Madrid, may be the only Spaniard leading the creative department at a U.S. Hispanic agency.

Mr. Sunol has also worked in Mexico, as deputy chairman and executive creative director of JWT Mexico for three years, before returning to Spain six years ago as executive creative director of Bassat Ogilvy Madrid. This will be his first job in the U.S., although he lived in Wisconsin as a high school student and returned to the U.S. to go to college in Massachusetts.

Luis Miguel Messianu, Alma's president and chief creative officer, said, "He is entrepreneurial and his personality truly fits the Alma values of curiosity, collaboration and accountability."

For his part, Mr. Sunol was eager to leave Spain, where years of recession have left ad industry executives dispirited and much of the local work increasingly mediocre.

For Ford dealers selling pre-owned cars in Spain, Mr. Sunol said the insight was that what makes a new car feel brand new is its new-car smell. To create the new-car feeling, the agency painstakingly researched and created an air freshener product that captured that distinctive scent for its "Olor a nuevo" ("Smells like new") campaign.

For Santander bank "we came up with a very silly idea," said Mr. Sunol, speaking from his vacation home in Spain's Canary Islands. To show customers how easy it is to bank online with Santander, the agency created a torpedo-shaped croquette that headed in slow motion toward a laptop and managed, as it collided with the computer screen and exploded, to click all the right keys to register an online account. The memorable slogan was "If the croquette can do it, so can you." 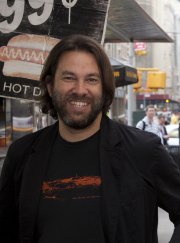 Wing's new creative leader, Favio Ucedo, is from Argentina but started U.S. Hispanic independent Grupo Gallegos with founder John Gallegos in 2001. He recently moved to New York from Los Angeles to become chief creative officer of Grey's Hispanic agency. In more than a decade at Grupo Gallegos, Mr. Ucedo helped reverse declining milk sales among Hispanics for the California Milk Processor Board. During his tenure, Grupo Gallegos was named Ad Age's Multicultural Agency of the Year in 2008.

One of his last campaigns there was a simple but very effective message for the Alzheimer's Association, linking the sensation of memory loss due to Alzheimer's with the common frustration of forgetting your password on a website.

One of Mr. Ucedo's first tasks at Wing is leading a project with other Grey offices in Latin America for a corporate campaign for Procter & Gamble, a major Grey client, in the region. To develop a collective creative awareness, he is also behind Wing's new weekly all-staff meetings, where a different staffer each week is assigned to select and present a winning case study from the Cannes Lions International Festival of Creativity.