Company Alters Campaign to Raise Awareness of Brand, Teach How to Incorporate It Into Cooking
READ THIS NEXT
Study finds more Hispanics than non-Hispanics view cannabis as beneficial

NEW YORK (AdAge.com) -- As more companies target the growing U.S. Hispanic population, Hispanic marketers are trying to extend their sales to the rest of America.

Take Goya Foods, the $1 billion U.S. Hispanic-owned food company. Founded in 1936 by Spanish immigrant Prudencio Unanue and still run by his grandchildren, Goya first catered to Caribbean immigrants, then branched out into Mexican and other Latin American foods. Now it's taking advantage of Latin food's popularity to win new customers. 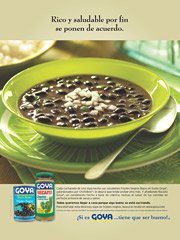 Bowling them over: Ads show how to integrate Goya into everyday cooking.
Several years ago Goya began using WPP's Winglatino for general-market and Hispanic advertising. The company spends about $20 million a year on ads in both Spanish and English that target "kitchen artists" who enjoy cooking.

"We're not making a significant distinction about being Hispanic or non-Hispanic," said Alvaro Serrano, Goya's senior marketing manager. "Although it's the same campaign platform, we wanted two slightly different executions. The two groups are at different stages in their experience with Goya. Hispanics have experienced it longer and used more than one product line. With general-market consumers, we want to make them aware of the brand and educate them on how to integrate Goya into their everyday cooking."

Besides TV and print ads, Goya does what the company calls "integrations" -- about 20 on English-language TV and 80 on Spanish-language TV last year. On Telemundo's "Diseno Popular" program, Goya's Chef Omar taught a homeowner to prepare a surprise dinner for his wife as his kitchen was remodeled around him on the popular home makeover show. And Goya did a sweepstakes with ABC that landed the winner a trip to Los Angeles for dinner with a soap star from "General Hospital."

Those integrations helped drive traffic to Goya's website from 650,000 to about 1 million visitors a month, although Goya can't tell whether they're watching, for example, videos on how to cook arroz con pollo in English or in Spanish.

Local stock
One of Goya's greatest strengths is its grass-roots distribution, tailoring product mix to a neighborhood's ethnicity. Even at one-size-fits-all Walmart Stores, which accounts for only about 10% or 15% of Goya's sales, the company is one of the few Walmart allows to stock locally.

Goya's sales grew about 10% in 2008, and the company is looking for new added-value products, such as low-sodium and organically grown beans, to boost that even further.

Each year Goya launches hundreds of new products, said Senior VP Joseph Perez, although not all survive. One flop was a granulated version of a popular beverage made by grating a block of raw brown sugar. "Apparently the fun and tradition is doing the grating," Mr. Perez said.

The company is run by CEO Bob Unanue, one of eight Unanues who work at Goya. Ads still use the company motto, "If it's Goya, it has to be good," which was coined by the founder.

"The concession stands are working well, and we're going to see how to increase that presence in a few other ballparks," Mr. Perez said. "Maybe that's what baseball food is going to be -- taquitos and croquetas."