Hispanic Mags Post Double-Digit Ad Gains, but Not All Are Thriving 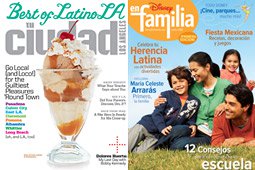 Uncovered: July saw the final issue of Tu Ciudad and the first of Disney en Familia.
Instead, the June-July 2008 issue was the last for Tu Ciudad, as partner Emmis Publishing pulled the plug. With Emmis' radio-division revenue sliding and cash flow shrinking, the company could no longer afford the $1 million Tu Ciudad was budgeted to lose in 2008 on the way to breaking even by 2010.

Although the English-language Latino magazine didn't meet an ad-sales-growth target of 45% for the first half of 2008, Mr. Gamboa said, sales still were up 20%. "And we left a lot of money on the table for the third and fourth quarters," he added.

Among Hispanic media, the magazine category is posting double-digit ad-revenue gains, but not every title is growing, and some, such as Tu Ciudad and Estylo, an 11-year-old, bilingual Latin entertainment and style magazine whose final issue was June 2008, are closing.

Mag growth
Even so, ad spending in Spanish-language magazines grew 14.2% in the first quarter of 2008, way ahead of the 0.8% growth for U.S. magazines overall, according to TNS Media Intelligence. In 2007, growth was about 10%.

One Hispanic-magazine category that shows promise is parenting. "One in four U.S. births is to a Hispanic mother," said Ruth Gaviria, executive director of Meredith Corp.'s Meredith Hispanic Ventures, publisher of the leading Spanish-language parenting title, Ser Padres (To Be Parents), distributed in pediatricians' waiting rooms.

For the Meredith fiscal year ending in July 2008, Ms. Gaviria said Ser Padres' ad revenue is up close to 55%, but the rest of 2008 will be tougher as some advertisers pare spending. This week Ser Padres is starting a bilingual blog, called MimosBlog, for Hispanic moms. Meredith is also bringing a title for expectant mothers called Espera under the Ser Padres umbrella and will increase Espera's frequency from two to three times a year and bump up its controlled circulation 35%, to 1 million.

Also aiming at parents, the Walt Disney Co. started its first Spanish-language magazine in July with a tempting demographic: Disney en Familia will be mailed quarterly to 350,000 Hispanic families with children between the ages of 4 and 12 who are in Disney's database because they have visited its parks, bought merchandise or asked for information about Disney. Each issue includes an interview with a Hispanic celebrity and parent and a section on Disney, such as its latest movies. Stories include everything from craft projects to tips on the tricky task of language preservation when kids won't keep up their Spanish. (One parent said frankly: "We pay them.")

The biggest Hispanic magazine, People en Espa?ol, did a promising website relaunch last year, but print ad revenue is suffering, down 10.9% in the first quarter of 2008, according to TNS. In 2007, the monthly magazine's ad revenue was up just 1.7%.

Mr. Gamboa hasn't given up on reviving Tu Ciudad, perhaps as an online brand, and continues to look for new financing.

"There are still only a handful of Hispanic print players," he said. "Until you see the financial industry start to inject money into our media projects, I don't think you're going to see much growth."