Demo Accounts for One in Six U.S. Residents, Nearly Half Are at Ease in English
READ THIS NEXT
Study finds more Hispanics than non-Hispanics view cannabis as beneficial

NEW YORK (AdAge.com) -- If you're looking to reach upholders of traditional American values, your best bet might be the Hispanic market.

The market is growing: The 2010 Census expected to count a record 50 million Hispanics, or one in every six U.S. residents, meaning the Hispanic population will have increased a stunning 42% from the previous census in 2000. (By comparison, the non-Hispanic population will have edged up just 5% in that decade.) It's also got scale: Hispanics are now the nation's second-largest consumer market after white non-Hispanics, who are still the largest group at about 200 million.

But perhaps the most remarkable aspect of Hispanics in America is how closely they exemplify our idealized concept of 1950s America. They are young (their median age is about where the whole nation was in 1955) and more often live in large, traditional, married-with-children families with lots of participation from grandparents. 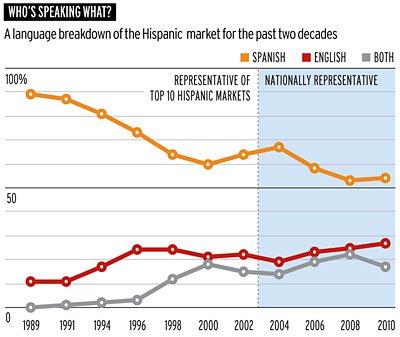 More often than not, according to data from the Bureau of Labor Statistics, they eat family meals at home, and spend less than average on alcohol. They're moving to the suburbs, tend to be community-oriented, and have high aspirations for their children. In short, they are the sweet market for consumer goods and services that the entire nation used to be when baby boomers were young. 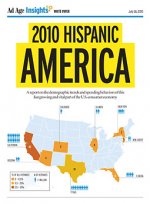 Hispanic children are overwhelmingly U.S. born. Fully 91% of Hispanic children were born in the U.S., compared to only 47% of Hispanic adults, which has great implications for the demographic's speed of acculturation. With the Hispanic market at this tipping point, one of the biggest challenges for marketers is reaching young, acculturated bilingual Hispanics who behave differently than their parents who didn't grow up in the U.S. and don't spend as much time with Spanish-language media, but still feel a deep sense of Latino identity.

More than 1 in 3 Hispanics in the U.S. (34.3%) are children under 18 years old, as compared to fewer than one in four children (22.5%) that are non-Hispanics. The youthful U.S.-born Hispanic population means that children of immigrants, who typically attend public schools, where they learn English, will acculturate much faster than their parents did. And, in fact, English is making gradual gains as the language U.S. Hispanics are most comfortable speaking. Some 27% are most comfortable in English, with another 17% comfortable in both English and Spanish; meaning that nearly half?44%?of the demographic is at ease in English.

Over the next decade, as millions of bilingual Hispanic teens become young adults, we can expect their consumer behavior to move closer to other non-Hispanic young adults. However, the very large size of this segment suggests that the Hispanic culture is likely to remain strong, even among U.S.-born children.

The major difference between today's immigrants and those who have come before them is the phenomenon called globalization. Inexpensive air travel, the internet and native-language TV stations featuring content from country of origin all allow this group of immigrants to come to the U.S. and become acculturated but still have close ties to their home countries in ways that past immigrant groups could not. That is having and will continue to have a transformative effect on the U.S. culture, including music, food and sports, as illustrated by this year's World Cup fervor.

Hispanics will become a major force in U.S. consumer-spending growth over the next decade and beyond. The slowing growth and aging population that characterizes other segments of consumers means that younger and larger Hispanic families will be more vital to future growth in consumer spending than at any time in the past.

Hispanic consumers are the most geographically concentrated of any large consumer segment. The eight states with the most Hispanics are home to 76% of all U.S. Hispanics. About half of Hispanic consumers live in California and Texas. The other six states having more than one million Hispanics are Florida, New York, Illinois, Arizona, New Jersey and Colorado. By contrast, the eight states with the largest concentration of non-Hispanics have just 44% of that consumer segment.

By 2015, millions of baby boomers will have begun retiring, thus reducing their consumer spending. Hispanic consumers will play a major role in replacing those retirees in the consumer marketplace and will contribute to the upsurge of retail spending and economic growth.

And given their growing influence on this country's culture, perhaps one day we may be saying: "It's as American as dulce de leche."