NEW YORK (AdAge.com) -- This week five young U.S. Hispanics, clad in Levi's new Work Wear line, are starting a journey along the Pan-American Highway from Alaska to Argentina that will end in a 10-week reality show on Discovery en Espa?ol. The promotion is Levi's biggest effort yet in the Hispanic market. 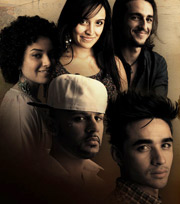 "The heart of our brand is about pioneering," said Doug Sweeny, VP of Levi's brand marketing. "We found that idea really connected with this audience."

The series, called "Norte a Sur: Una Ruta, 5 Experiencias" ("North to South: One Route, 5 Experiences"), will include stops in 10 different cities where the five travelers will pitch in on work projects involving the arts.

Along the way, Levi's will be taking advantage of research findings that young Hispanics are even more likely to have smartphones, blogs, and be active users of social media than their general market counterparts.

"Something cool is that now they're using technology and social networks to excavate into their past and cultural identity," Ms. Fauerso said. "They have a stream of salsa music from the 1970s on their Facebook page."

Although the TV series won't air until late September, the Levi's-branded website (www.norteasur5enruta.com) went live this week, and the five travelers, armed with iPhones, are posting updates to the site and their own Facebook pages throughout their journeys to seed growth and build a community of fans before the show's debut.

The TV show will be in Spanish, but the online component is likely to be a fluid mix of Spanish, English and Spanglish, one of the big advantages of digital media in Hispanic marketing.

To recruit young people interested in "the trip of a lifetime," Discovery put the word out through cable spots, Facebook and Hispanic influencers. The final five -- three men and two women whose interests range from hip-hop to social causes -- are aged 20 to 24 and include an aspiring male fashion designer originally from Mazatlan, Mexico; a female art major from Puerto Rico; a singer/songwriter in Florida, a journalist from Dallas; and a Mexican-American photographer.

The journey and reality show are part of Levi's broader "Go Forth" Ready to Work marketing campaign breaking this summer and fall. Levi's has been using the "Go Forth" tagline in ads by Wieden & Kennedy, some of which Dieste has adapted into Spanish. For the new Work Wear line, Levi's has set its general market campaign in the gritty town of Braddock, Pennsylvania as a new kind of frontier.

For the Hispanic effort, Dieste sent RFPs explaining the concept of Work Wear to a number of Spanish-language networks, and felt Discovery en Espa?ol understood the spirit of the journey and could deliver both a broadcast and an online audience.

"Instead of buying a block of Univision or Telemundo programming, through Discovery we were able to insert our brand in the concept of Go Forth," Mr. Sweeny said.

At each of the 10 stops along the route, the five travelers will be filmed working on projects involving music, style, or design. In one stop in El Salvador, for instance, they'll help with projects at an incubator for young entrepreneurs from impoverished or at-risk backgrounds. Not coincidentally, there is a well-known surfing spot nearby for some scenic footage.

Before embarking on their journey, the five recruits visited a Levi's showroom in Los Angeles for full wardrobes from the new Work Wear line to wear on their travels.

"We tried to style them based on their personalities, not just throw the product on them, and they'll engage in real work," Mr. Sweeny said. "It's a physical manifestation of Go Forth."