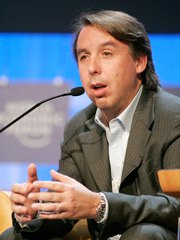 Emilio Azc?rraga Jean
Televisa alleges breaches by Univision in a long-term programming deal that accounts for about 40% of Univision's programming, including prime-time telenovelas. The 25-year agreement gives Univision exclusive rights to broadcast Televisa's shows in the U.S. until 2017.

Televisa hopes to prove material breaches in the programming agreement that would allow it to end the contract, freeing the Mexican broadcaster to negotiate a better deal or try to start its own U.S. channels. Univision pays Televisa about $130 million a year for programs, based on advertising sales, and dismisses Televisa's claims that it is owed more. If Univision loses -- a decision the company would likely appeal -- the network could be forced to spend heavily to come up with new programming that might garner lower ratings.

Bitter fight
The trial, already postponed four times despite little progress in negotiating an out-of-court settlement, is expected to last about four weeks. The fight is especially bitter because Univision passed over a Televisa bid to buy the company in 2007 and accepted an offer from private investors.

The two sides expect to call 38 witnesses, including Emilio Azcarraga Jean, CEO of Televisa and grandson of the founder of the Mexican media group; Univision CEO Ray Rodriguez; and Jerrold Perenchio, Univision's former CEO and chairman until the company was sold in March 2007 to private-equity investors for $13.7 billion. Joe Uva, who joined Univision in 2007 as CEO, is not on the witness list. Many of the witnesses are financial and legal executives from Univision and Televisa.

According to pretrial documents, Televisa grilled Peter Scanlon, Univision's senior VP-sales analysis and planning, on "his lack of cooperation and misleading of Televisa's accountants with respect to make-up advertising and other matters [and] bad faith" in a deposition that will be shown on video. Univision plans to call Mr. Scanlon in person to testify on "Univision's sale and pricing of advertising time and its stewardship of advertising contracts, including issues relating to 'audience deficiency units' and 'make goods,'" according to pretrial documents.

The person who will likely spend the most time testifying is Andrew Hobson, Univision's senior exec VP-chief financial officer and chief strategic officer.