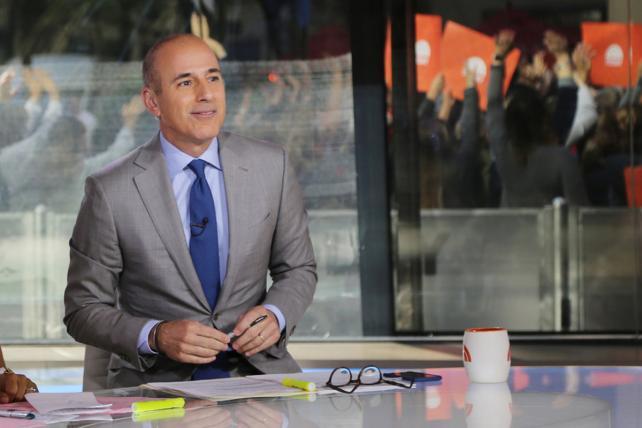 The results of a NBC Universal internal investigation are out today and here's the bottom line: The Matt Lauer sexual misconduct scandal was, well, Matt Lauer's fault—and it was not the fault of NBC News managers.

The seven-page document, titled "NBC News Workplace Investigation," which covers the network's news division as well as MSNBC, was commissioned by Steve Burke, CEO of NBCU; on Nov. 30 of last year, he instructed NBCU General Counsel Kim Harris to, as the document puts it, "assemble and supervise a team of experienced lawyers and HR professionals from outside the News Division" to dig into the Lauer scandal, to attempt to uncover other incidents of "inappropriate workplace behavior" and to determine if "employees in the News Division are comfortable reporting concerns about workplace behavior, and if not, why not."

We found no evidence indicating that any NBC News or Today Show leadership, News HR or others in positions of authority in the News Division received any complaints about Lauer's workplace behavior prior to November 27, 2017. All four women who came forward confirmed that they did not tell their direct manager or anyone else in a position of authority about their sexual encounters with Lauer. ... Most witnesses interviewed stated that they had heard or read rumors about Lauer's personal life, including tabloid stories about the troubled state of his marriage and the possibility of extramarital affairs, but those witnesses believed, with limited exceptions, that the rumored extramarital affairs were with women outside of the Company.

The report also directly addresses one of the most disturbing rumors that emerged during early reporting on the scandal:

The investigation team also inquired about the nature of the "button" in Lauer's office that was alleged to have locked the door. According to the NBCUniversal facilities team, the button is a commonly available feature in executive offices in multiple NBCUniversal facilities to provide an efficient way to close the door without getting up from the desk. The button releases a magnet that holds the door open. It does not lock the door from the inside.

In a section titled "Culture Assessment," the report states that "the investigation team found current and former NBC News and Today Show leadership, News HR, and others interviewed who were in positions of authority in the News Division to be credible in their denials of knowledge of Lauer's inappropriate sexual behavior in the workplace." But NBC News culture doesn't entirely escape criticism, with one passage noting that,

Although the witnesses interviewed were generally aware of official Company channels to raise workplace issues, a number of them said they had concerns about reporting inappropriate workplace conduct to News HR, including: a lack of familiarity with News HR representatives; a fear of retaliation; a belief that complaints cannot or will not be kept confidential; and a lack of a private environment in which to raise issues, because News HR sits in glass-walled offices among other News Division employees. Similar concerns regarding a lack of anonymity and fears of retaliation were raised about reporting complaints directly to management. ...

Further, during the small group sessions, employees perceived a lack of connection with News HR, an absence of transparent communication from both News HR and their managers, a sense that News HR was too closely aligned with management, and a fear of subtle retaliation, as barriers to reporting concerns.

Of course, some of these employee perceptions—particularly the notion that HR exists to do the bidding of management—are common at many companies. But NBCU is promising to do better, with the report stating that management will "soon will be issuing an updated Company-wide policy to provide greater detail on expectations regarding workplace behavior, to explain the investigations process and to ensure that all management employees understand their obligations to report concerns."