Mozilla Will Serve Ads Within Tiles Of Its New Tab Pages
READ THIS NEXT
Premium Publishers Are Getting Victimized By Traffic Fraud, Too

Mozilla will soon sell ads within its Firefox browser, the company announced Tuesday.

Wait, what? Mozilla made itself the villian of the online ad business early last year by announcing that the latest version of Firefox would block third-party ad technologies by default, a move the Interactive Advertising Bureau's top lobbyist called "a nuclear strike" on the industry.

A year later, the non-profit Mozilla is launching an ad business, at the IAB's annual meeting in Palm Desert, Calif., no less.

The ads will appear within the tiles of Firefox's new tabs page, which will also begin to suggest pre-packaged content for first time users. Mozilla is calling the new initiative "Directory Tiles."

"Some of these tile placements will be from the Mozilla ecosystem, some will be popular websites in a given geographic location, and some will be sponsored content from hand-picked partners to help support Mozilla's pursuit of our mission," the company said in a blog post. "The sponsored tiles will be clearly labeled as such, while still leading to content we think users will enjoy."

Mozilla started laying the groundwork for this last summer with by testing an opt-in system that would allow users to receive tailored content based on their browsing history. Late last year it made a big hire in former kbs+ Ventures chief Darren Herman, who joined as VP, content services, who will lead Mozilla's ad and content efforts.

"Mozilla is moving from a dumb window to the internet to a smart agent on behalf of the user, putting the user first," Mr. Herman said.

Onstage with IAB CEO Randall Rothenberg, Mr. Herman made light of the differences the organizations have had over the past year. "Just looking around making sure there's no nuclear bombs," he said. "There's no nuclear winter coming, the weather is nice out and we're very excited to be here Randall." 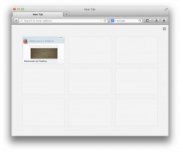 The revenue opportunity is significant, as Mozilla sees 100 billion tile impressions in the U.S. alone each year, according to a company spokesperson. But the program is likely to start slow, as it will only reach first time users -- only 31 million uniques per month, according to Mozilla principal, strategy Chris Tacy.

Mozilla is a non-profit, so the move to sell ads may seem odd. It also launched a browser But the company makes 97% of its revenue from search and it's looking to diversify that revenue.

While no advertising partners were announced, the company said it is seeking them out. "We are looking to partner with like-minded content owners and creators, such as leading publishers and curators as well as innovative advertising agencies," the spokesperson said.

Premium Publishers Are Getting Victimized By Traffic Fraud, Too

Walmart's Advice to Ad-Tech: Dumb It Down, Please

IAB To Advertisers: Time to Step Up Your Mobile Game