Confessions of an Advertising Conservationist 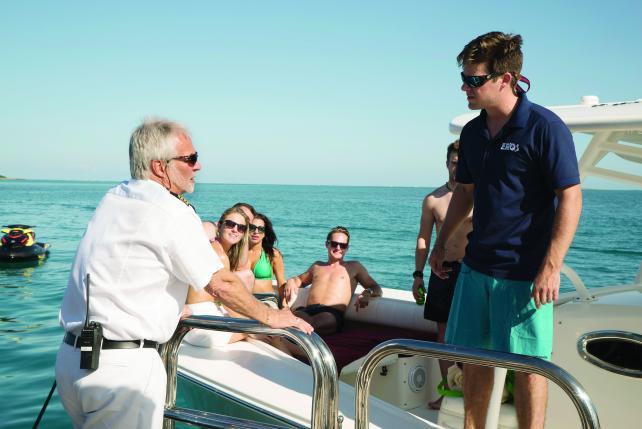 Bravo's 'Below Deck' is good TV. No. Seriously. Wait, where are you going?
Credit: BRAVO

When I started at Ad Age in 2000 as a copy editor, I was the youngest person on the editorial staff. The other staffers weren't that much older than me, but I was a young punk coming from a publication with dot-com as part of its title and Ad Age was just that year switching to Microsoft Windows. (I assumed from computers and monitors that used flashing-green cursors.) The other copy editors and I spent a lot of time on the web surfing proto-blogs and trying to get Napster or Limewire onto our machines without IT noticing. We posted four stories in the afternoon to Ad Age's website before sending out the Ad Age daily fax.

I thought I was so cool.

What a difference 15 years makes. It goes without saying that I'm far from the youngest person in the office (though sometimes I act like it). And now the younger people probably make fun of my media habits behind my back—if they're not doing it to my face. Sure, I'm on the Facebook and the Twitter and the Instagram. I do my reading on my iPhone. But that's about where it ends for me. Pinterest? I already know how to make dishes with Velveeta. Pandora or Spotify?

Hard enough to concentrate at work without Taylor Swift singing to me. Certainly no SnapChat, whatever that is or does.

And TV. The kids don't know what to make of my TV habits. I'm probably supposed to say something like "my video-watching habits." But if I'm being honest, it's almost purely TV. I'm one of those people you may have heard of. I watch appointment TV. On the night it airs. Sometimes even on broadcast networks. And I sit through the commercials. The only thing I don't watch, aside from "Real Housewives of New Jersey," is TV news. I'll kill what brain cells I have left with alcohol, thank you very much. (So my apologies to CNN, Fox News and all the retired celebrities advertising reverse mortgages and life-insurance policies.)

Cord cutting? Hah! I've got DirecTV and TimeWarner (the latter for internet). Why cut my cords when I can find "Below Deck" and "Real Housewives of New York" and "Big Bang Theory" and "Black-ish" and, yes, "Game of Thrones" all at their appointed times and network location -- and, just as importantly, syndicated reruns of "Law & Order: SVU" or marathons of "House Hunters International."

Besides, if you're reading this, you should be thanking me—and the millions of people like me who are conserving this way of life, sustaining the ecosystem for one extra day. There are a lot of us who don't bother with ad blockers and can barely be bothered with DVRs. Sure, some of us are slightly tired and lazy. But some of us just like old-fashioned broadcast TV, even the non-sports stuff. We're looking for some easy escapism that media companies are delivering and marketers are subsidizing. And while I've grown a thick ad-resistant skin, I'm going to bet a lot of people out there haven't. (I hear there are some people who watch TV channels specifically just to shop for things!) So, your advertising is not only being seen on TV channels and in newspapers and on websites across the country, sometimes it's actually working.

We're not cool. I know it. We might be a silent majority, but in the youth-and-tech-obsessed media and ad centers of the world, we're written off as a species on the verge of extinction. Maybe it's right to do so.

I gave a talk to a group of high school kids the other day. None of them would admit to watching TV on TV, with the exception of live sports. That's got to be terrifying for a lot of folks in advertising.

But the truth is, marketers and ad agencies will find a way, I believe. They always do. We might not know how it'll be done, but marketing messages will get to viewers and consumers, despite major shifts in technology and demographics.

Media companies have a little more to worry about and, since we control the news spigots (for now), we tend to boost that anxiety signal. But even we'll survive.

After all, those kids who said they don't watch TV? They'll grow up. Even before they do, the little class of supposedly non-TV watchers all admitted to remembering insurance ads—TV ads. And they remembered them because, yes, they're on all the time, but also because the ads are memorable in some way, shape or form.

So good job, Geico and Progressive and State Farm and Farmers and Allstate and all of your agencies.