It Might Not Be Trendy, but Old-Fashioned Advertising -- Done Right -- Still Works

In this age of media fragmentation, true disruptors have to get away from the idea of interruption as a means of marketing. For advertising to work, you have to reach people where they are. You've got to pull, not push.

Did the above paragraph make any sense to you? 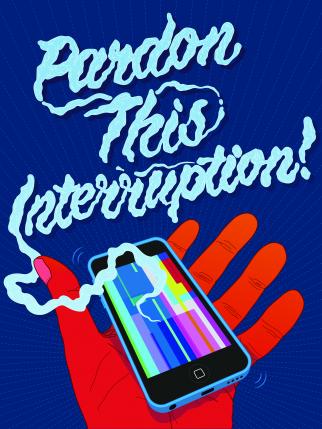 You probably think it did. Because you've heard some variation of it -- from agency heads, CMOs, ad-tech guys, TEDx speakers -- about 6 million times in the last 10 years. You've heard it so often, it's become almost like a prayer or a hymn. You sit there, nodding your head, thinking, "That's right. Amen."

But does it actually mean anything?

Not really. Oh sure, as a string of nicely arranged jargon aimed at a receptive audience, it might be comforting and familiar, something that hints at salvation from the chaotic world in which we live.

But if you start picking at it, it falls apart.

Media fragmentation is our reality. It's not going anywhere. I'd like to think that at some point it will stabilize. And it probably will. But sometimes it's hard to believe, especially when you read stories about time shifting, cord cutting and a generation of children who think they can just watch whatever they want whenever they want on that thing Mommy keeps in her purse.

Many people in the industry have put their heads down and are working every day to deal with the situation. But a good number of people -- especially those of us who work in media and fear our paychecks being disrupted -- are in a continual state of panic about fragmentation.

And in that panic, some folks have decided that everything needs disrupting, particularly traditional marketing.

The funny thing is these disruptors have a big problem with interruption.

That's the problem with traditional marketing. It has the gall to "interrupt" consumers' daily lives with lame things like TV commercials and print ads and direct mail.

Left to these guys, we'd go from a rather polite "Pardon the interruption" aimed directly at a consumer, to talking about them behind their backs and saying things like, "We're gonna disrupt the hell out of them. Gonna scrape up all their data and stalk 'em around the web. They'll never even know they're being advertised to."

One of the more damaging things the disruptors do is convince marketers that there's something almost shameful about old-school advertising and marketing methods. You can't interrupt. You have to attract.

Listen, I get it. Companies should be out there trying new ways to build their brands and stoke brand awareness. Throw some money at engagement efforts and "real-time" marketing (that will be seen -- and forgotten -- immediately). There's nothing wrong with image campaigns that contain a soft sell or no sell at all.

Procter & Gamble in the past five years has pushed boundaries with Old Spice's "The Man Your Man Could Smell Like" as well as the recent Always "Like a Girl" effort. Those are great. People -- including me -- love them. But the company also spent a ton of money on promotions, couponing and regular old-fashioned advertising. True fact: "The Man Your Man Could Smell Like" started out life as a lowly TV ad.

Yes, the phrase is meant to imply that marketers need to get their messages in front of people, to think beyond the TV set, the radio and desktop computer all the way to the mobile phone.

Marketers are in the process of figuring these things out. Ever since the town crier was confronted with the invention of the traveling circus, marketers have been adapting to new technology. They'll get there. And they'll do it without throwing away a hundred or so years of accumulated knowledge about what works -- and the technologies that still allow them to reach mass audiences.

There's nothing wrong with interruption, especially if you're footing the bill for the programming. It's the job of those who toil in adland to make that interruption count. That can be done a number of ways, whether it be hammering home a sales point or entertaining the target -- or both.

A friend recently sent me a video called "Denali," about a surfer and his dying dog. The dying dog narrates this heartbreaker of a film, which it turns out was made possible by Patagonia. There's no Patagonia branding, just a mention in the credits that would probably go unnoticed by consumers who don't work in advertising. But for those who do notice -- and weren't (spoiler alert) completely traumatized by the death of the dog -- it likely creates a warm spot in their heart for Patagonia.

I guess that's what we'd call "pull" advertising. I guess they found me where I was (checking Facebook from a hotel room in Canada).

But if Patagonia wants to actually sell me something, it had better interrupt my day with an email containing a coupon.

Ken Wheaton, the managing editor of Advertising Age, writes our Last Word column. His latest novel, "Sweet as Cane, Salty as Tears," was published in 2014.