Think Twice Before Kicking All Those Middle Managers to the Curb 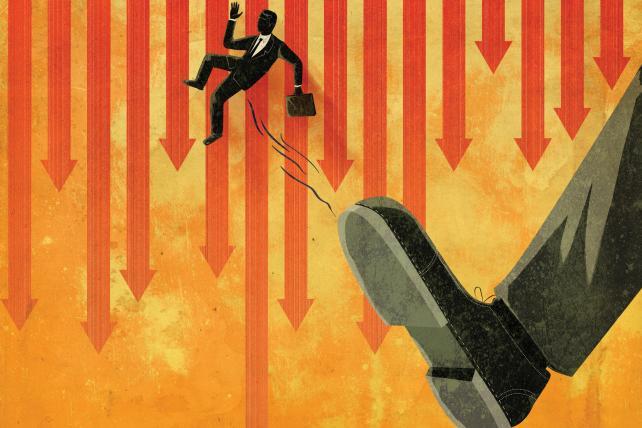 You work in an industry with fairly slim profit margins. It's labor intensive and most of the work can't be done by machines or outsourced to foreign countries. People are expensive. So when crunch time comes -- a couple of bad quarters at your company or a recession that socks the entire sector -- it's people that get cut.

Obviously, the company can't whack senior management. And the young people, the newest hires, well, sure, they could be let go, but they're cheap. And they'll learn eventually. Besides, they're the only ones who know how to play the Snapchat and make the Twitters and such.

So, out go the middle managers! They cost a lot of money. There are a lot of them. And, well, they're kind of "meh."

There's nothing sexy about "middle" anyway.

Now the company is saving money. It's doing more with less. It's running lean, like one of those startups you always hear about.

But, boy, all of a sudden, retention isn't so hot. The folks who do stick around are cranky or miserable or paranoid or all of the above. And these damn kids coming out of college don't seem to know anything, yet seem to expect things like training and development.

Does any of that sound familiar?

I'd bet it does. I'd also bet you're thinking: "Man, the ad industry is the worst." Or: "What did we do to ourselves in the media world?" Or: "CPG sure isn't what it used to be."

The thing is, while culture and talent are "on trend" across all of our industries, there seems to be a gap between best practices and reality.

According to a survey conducted by Contexxt for the Cannes Lions School, 33% of people working in the ad industry said their biggest motivator is personal development. And bosses are aware of this. While 87% said they'd like to create a culture that retains employees and 62% said training was important in their own careers, only 36% offer further educational benefits.

That's not exactly surprising. Further educational benefits, even on-the-job training, cost time and money. But such programs are crucial, not only because it's good for employee morale. The fact is your average undergrad doesn't come into the workplace prepared for reality.

Universities aren't trade schools. And they shouldn't be. Even if our universities were trade schools, they still wouldn't suffice, precisely because many undergraduate programs specifically tailored for advertising, marketing and media are staffed with people who last worked in the industry, if they worked in it at all, during the Reagan administration. (And don't get me started on the graduate programs.)

But who's left to do the training? Management is, rightly, focused on strategy and steering the overall business. Junior staff members are breaking their necks getting the actual work done and don't have the institutional knowledge. And in between?

There are senior working staff, yes, but they're stretching themselves thin overseeing multiple projects and keeping an eye on the next step up the corporate ladder. (Because God forbid you don't have your eye on the next move up. You're an older person who just likes doing the job? What's wrong with you?)

In a perfect world, there would be no layoffs. But we don't live in a perfect world. We live in one where the herd must be culled to squeeze out a profit or to meet the incessant investor demands for growth at any cost. So when that happens, maybe be a little more considerate about who gets the ax. Sure, cutting employees who cost a lot of money and need time off for family and use all their benefits is the quickest solution. But not the smartest one.

Gutting middle management or senior working staff or whatever we call it is not only unfair, it's bad business. And I'm not saying that just because I'm now on the wrong side of 40! I've had two conversations in the past two weeks with agency people who agreed that, with so many cuts to this layer of talent, we're getting to the point where we don't know what we don't know anymore.

You've got hotshot newbies with untapped potential and a hunger for knowledge. Whatever you think about millennials and Gen Zers, the good ones know they lack certain skills and they want desperately to learn. Who better to teach them than the boomers and Gen Xers who were once hotshots, the ones who've stuck around out of love for the craft and loyalty to the company and know the business inside out, up and down, forward and backward. Maybe they don't want to be managers, but many of them might make damn fine mentors. And rewarding them, or at least keeping them on board, will also have the benefit of making folks a little less paranoid that the longer they stick around, the better their chances of getting the ax next time the economy tightens.

Seniority in the working ranks should be a positive attribute, not a liability.

Don't get me wrong. This isn't an argument for bloating a company with people sitting around and grousing about what it was like back in the day. No one needs an office full of get-off-my-lawners or people just collecting paychecks until retirement. Not at all. But there's got to be a happy medium, no? Or at least some middle ground.