Believe It or Not, It's Perfectly Fine if Your Idea Isn't Data-Driven | Ad Age
Skip to main content

Believe It or Not, It's Perfectly Fine if Your Idea Isn't Data-Driven 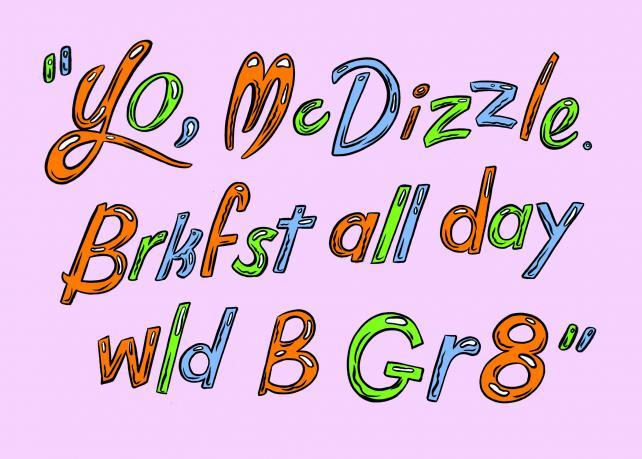 People were saying this before Twitter was even born.
Credit: Kelsey Dake

Here are a few of the many things I learned while at the Association of National Advertisers Masters of Marketing Conference in Orlando: You can get 2,700 people to sing along to Wilson Phillips; while millennials represent $200 billion in purchasing power, people 50 and over represent $3.2 trillion; there should be an adults-only airline leaving Orlando on Saturdays; and apparently we have data and social media to thank for McDonald's decision to serve breakfast all day.

During a CMO Roundtable discussion about the power of data-driven insights, McDonald's USA CMO Deborah Wahl said that the marketer arrived at the decision to serve all-day breakfast thanks in large part to social media data.

I'm not sure what happened at other tables in the venue, but at my table, eyes were rolling so hard, I'm surprised there weren't multiple eye sprains.

That's right. After decades – DECADES -- of McDonald's consumers of all ages practically begging for 24-hour breakfast, it was "social media data" that was the deciding factor.

OK. Maybe -- just maybe -- a truckload of tweets and Facebook comments saying "Yo, McDizzle. Brkfst all day wld B Gr8" (this is how people tweet in McDonald's latest ads) gave corporate the ammunition it needed to convince franchisees that all-day breakfast would be a good idea. After all, fast food franchisees do seem to be a stubborn bunch, always pushing back on margin-killing value menus and overpriced celebrity advertising. And it's always been assumed they didn't want all-day breakfast because it screwed up the flow of the day. So McDonald's HQ now had honest-to-god proof that people would gladly pay for McMuffins at four in the afternoon.

Granted, people on a panel at a conference will sometimes say nearly anything to wedge a talking point into the topic at hand, but it's a bit much to attribute the all-day breakfast decision to data.

By that line of reasoning, you could claim that data was responsible for

Data is a wonderful and powerful tool that can do many things. But just because it's the topic du jour, it does not mean that everything has to be data related. Sometimes you just have a good idea. Sometimes your gut—or even your boring old human brain—does lead you in the right direction. Sometimes necessity, not data, is the mother of invention.

To give the ANA panelists their due, all of them acknowledged that data for data's sake can be useless if not downright harmful. ADT Senior VP-CMO Jerri DeVard pointed out that a pile of numbers is nothing without insight. John Costello, president of global marketing and innovation at Dunkin' Brands, warned about "analysis paralysis," in which a marketer becomes so reliant on data that it becomes unwilling or unable to make decisions without data analysis, copy testing, focus grouping or any of the other things that can be useful but sometimes aren't.

In fact, if we had to involve data analysis in every decision, we might still be freezing our butts off in caves and wearing our teeth down on uncooked meat.

It's all too easy to imagine the sort of report that the creation of fire could have generated.

"During the course of Project Two Rocks, it was discovered that banging two pieces of flint together did produce a spark, which did in turn lead to fire. But after further analysis, it quickly became clear that this result only happens with flint, and that 99.8% of instances in which any two rocks of other kinds are banged together, there are no sparks and thus no fire. While this is slightly better than the results we've seen by standing in a field with a stick and hoping to get struck by lightning, the percentages still don't make sense. We recommend abandoning Project Two Rocks and simply waiting here in the dark for someone to invent the Zippo."

To be clear, this isn't a case of Cranky Pants Wheaton screaming at those Wacky Data Kids to get off my lawn. We're seeing a lot of great data-enabled -- even data-led -- marketing: targeted ads, better loyalty programs, borderline Big Brotherish tracking efforts, even art. I'd encourage anyone interested in the space to check out artist Laurie Frick, who recently spoke at our Ad Age Data Conference and embraces the quantified life in a way that marketers and telecom companies can only dream about.

It even shapes old-school advertising. I feel like I keep coming back to insurance advertising, but there's only room in my brain for so much stuff. One of my favorite examples is Geico's Gecko.

According to an interview we did with the company back in 2013, the Gecko was just meant to be one part of the company's ongoing barrage of advertising. But when analyzing the data from the first set of Gecko spots, Geico noticed a bump in business volume. "We were able to attribute the increased business to the campaign and decided to move forward with additional Gecko executions," Geico said at the time.

Here's another fun fact: Geico said the Gecko was launched with absolutely no research. Allstate's Mayhem, for what it's worth, was forced through without any copy testing either.

In both cases, it seems to have worked out.

All of which is to say, if you're using data for good, go ahead and brag about it. And if you're using gut-instinct or old-fashioned common sense or simple listening and getting good results, there's no need to label it something else just to be on trend.

Of course, for best results, you should probably be doing all of the above.