The World Doesn't Need Another 800 Words About Donald Trump

You Probably Know How This One Is Going to Turn Out 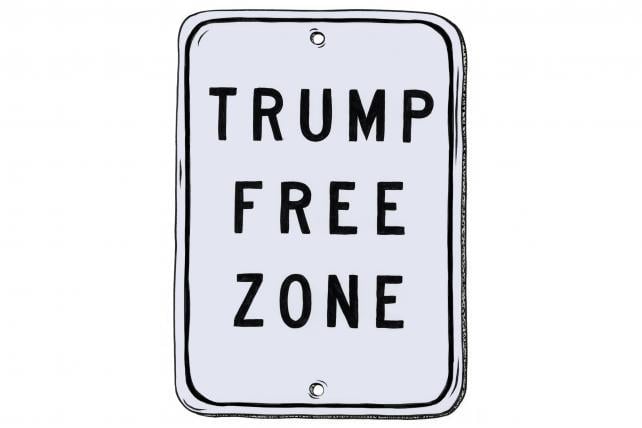 This is a Trump-free zone. I know that this is the political issue of Ad Age, but after editing the rest of the stories and after another week of nonstop Donald J. Trump coverage, I just can't.

And I'm not saying that just because I was so fantastically wrong back in December in this space, when I wrote: "I expect we'll be hearing less and less of him come January."

I then went on to quote Jeb Bush -- if you can believe it -- who'd told Trump at the time, "You're not going to be able to insult your way to the presidency."

Well, we see how that's all playing out.

I still think Trump will not win the White House. National polls show Trump losing to Hillary Clinton or Bernie Sanders in a head-to-head matchup. Then again, national polls don't necessarily reflect the reality of an electoral college election based on state-by-state voting.

As a professionally trained "objective" journalist, I am (somewhat) capable of putting bias aside and commissioning a cover story that attempts to get at Donald Trump's marketing prowess and what he might teach us. But I still personally believe that he offers marketers of products (rather than personality) no practical lessons.

And, trust me, I've been told repeatedly by marketing practitioners who don't even like Trump that I'm wrong on that count, too.

Although no one's been able to explain to me how a guy who lies so often, flip-flops so frequently and plays on some of the baser human emotions has been labeled "authentic." (Then again "authentic" ceased to have any actual meaning in adland back in 2014.)

OK. As I said, I'm not going to use this space to write about Trump.

It's not like I can say anything about his advertising, since he hasn't needed to do much. The gatekeepers in our mainstream media are so hooked on ratings from The Donald Show, they've pretty much given up on gatekeeping or even bothering with the simplest of questions, like "How?"

Even supposedly liberal MSNBC is so addicted to Donald it basically forced Melissa Harris-Perry, one of the few black female hosts in cable news, to quit her show in protest of endless preemptions.

If you want to see some hard-hitting reporting about the Trump campaign, you either have to tune in to HBO to catch John Oliver or resort to reading a newspaper. And who has time for that?

Besides, it's not like any minds are going to be changed. How does the meme go? "'Your relentless political Facebook posts finally turned me around to your way of thinking.' Said nobody, ever." If a Facebook post can't change minds, facts don't stand a chance, much less some Brit transplant on a premium cable channel. And when my evangelical friends and family don't care that Donald Trump has as much biblical knowledge as an atheist kindergartner and practically wrote the book on putting mammon above all, then who am I to judge?

So enough about Trump.

After all, I don't have any alternatives to suggest. Years ago, I outed myself on AdAge.com as a registered Republican, but what am I supposed to do in this primary? Vote for Ted Cruz? Earlier this political season, people bashed Trump for skipping a debate on Fox News. If he couldn't face Megyn Kelly, how was he going to face Vladimir Putin? With a blush and a smile, probably, but never mind that.

So you have to ask Cruz, if you can't win a debate against a guy with the vocabulary of a particularly dimwitted YouTube commenter, how are you going to make your case to our country or to the leaders of other countries? (Speaking of the debates, you can already preview how Trump would likely fare against Clinton, assuming she locks down her party's nomination. Just Google "Clinton vs. Lazio.")

Since no one likes a guy who just points out problems and offers no solutions, I should probably refrain from yet another Donald Trump column.

This election cycle has been like an office holiday party—perversely entertaining, but mostly exhausting and ultimately embarrassing for all involved. And to think, we have eight more months of this. I don't know how much more I can take.

So I'm not going to write about Trump.

Instead, I'm going to leave you all with a joke I overheard in the elevator last week from a bunch of Deloitte consultants (who, thankfully, were not visiting my office).

What kind of computer sings?

Wait. I have another one.

Damn. I ran out of space. How did that happen?