Tie-Ins With Action Hits Such As 'Iron Man' Help Boost Sales
READ THIS NEXT
How restaurant chains are duking it out to be the best in their categories
Burger King eschewed animated films in favor of family-oriented blockbusters, which turned out to be a smart move, as 'Iron Man' alone had a higher opening-weekend gross than all the summer movies affiliated with rival McDonald's combined.
Credit:

CHICAGO (AdAge.com) -- "The Dark Knight" may have been the king of summer blockbusters, but Burger King ruled the summer kids' meal tie-ins. The fast feeder, which promoted "Iron Man," "Incredible Hulk" and "Indiana Jones and the Kingdom of the Crystal Skull," credited the partnerships with contributing to its impressive 5.5% increase in fiscal fourth-quarter U.S. same-store sales.

Burger King eschewed animated films in favor of family-oriented blockbusters, which turned out to be a smart move, as 'Iron Man' alone had a higher opening-weekend gross than all the summer movies affiliated with rival McDonald's combined.
"Our market leadership enables us to select best-in-class marketing alliances and movie tie-ins such as this past quarter's affiliations with 'Indiana Jones,' 'Iron Man,' the 'Incredible Hulk' and 'SpongeBob,'" Burger King CEO John Chidsey boasted during this morning's call with analysts. (The marketer did a tie-in with the Nickelodeon property "SpongeBob SquarePants" in late spring.)

Action heroes seemed to be the key to the burger chain's success. Burger King eschewed animated films in favor of family-oriented blockbusters, which turned out to be a smart move, as "Iron Man" alone had a higher opening-weekend gross than all the summer movies affiliated with rival McDonald's combined. Cindy Syracuse, Burger King's senior director-cultural marketing, said the chain's "super fans" are 18 to 34 years old, and some of them are already parents.

Burger King, she said, looks for movies that young parents "would like to sit through," as well as those that fit the brand, meaning a "little more fun, with irreverent humor."

Restaurant sales reflect movie receipts
Success in kids' meal promotions is "always measured in same-store sales," Ms. Syracuse said. While last year's movies set a high bar for success, Burger King rolled out a healthier kids' meal this summer, with sliced apple "fries" and Kraft Mac & Cheese. Burger King does not break out kids' meals sales, but the company has acknowledged that they were up over last year. And while "evergreen" properties such as the Hulk can drive interest in toys despite what happens in the box office, opening-weekend receipts do matter, Ms. Syracuse said.

"When the advertising starts, you have an immediate lift, and then the next lift when the movie opens and people are out and about," she added. After that, it's the ongoing success of the movie and the overall popularity of the toys.

Burger King also tied the movie promotions to its signature Whopper sandwich. Robert Downey Jr. prominently chomped on one in "Iron Man," consequently earning himself free Whoppers for life. Burger King then came up with an "Indy" Whopper to promote the fourth Harrison Ford vehicle, with double patties, bacon, Cajun mayo and pepper-jack cheese, as well as an in-store scratch-and-win and online games.

McDonald's had planned to build on the success of last summer's "Shrek the Third" promotion. The fast feeder has been retooling its Happy Meal promotions to drive traffic online, promote exercise and include a moral theme whenever possible. 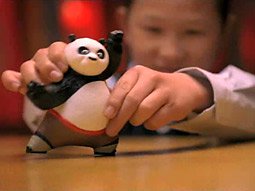 'Kung Fu Panda,' the focus of McDonald's Happy Meals this summer, brought in $60 million at the box office.
Yet "Kung Fu Panda," this summer's Happy Meal focus for Mickey D's, didn't deliver half of the blistering opening weekend of "Shrek," which raked in $121 million. "Panda" brought in $60 million. The summer's other, smaller, promotions were for box-office bomb "Speed Racer" and "Star Wars: The Clone Wars."

It may be unrealistic to expect Happy Meal promotions to move the needle on a company's overall same-store sales, but McDonald's is one of the world's largest suppliers of toys.

Little effect from Happy Meals
McDonald's best sales spike of the summer came in July, a month without Happy Meal news. May and June same-store sales were relatively high, at 4%, but spiked in July to 7%. McDonald's and analysts credited much of that increase to iced-coffee and sweet-tea promotions. (The fast feeder's "The Clone Wars" promotion didn't start until August.)

Rebecca Anderson, a marketing manager for McDonald's USA focusing on the kids' business, declined to comment on Happy Meal sales, the effect the box-office take has on a promotion or the success of "Kung Fu Panda" as compared with that of "Shrek."

The fast feeder has recently been building online components of its Happy Meal program, with a number of promotion-specific tie-ins. Children use codes from their Happy Meal boxes to log on to the site. Ms. Anderson said that average traffic to the Happy Meal site doubled during the "Kung Fu Panda" promotion, as did the duration of an average visit.

McDonald's also launched a virtual world for its Happy Meals in July. Children will vote on a name for the site until the "The Clone Wars" promotion ends Sept. 11.

Battle of the Burger Toys